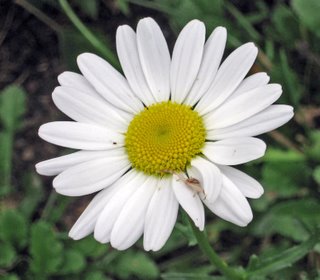 A single, confused daisy blooming a few days ago, does it "know" what's coming...

I just heard another "F" word come out of the mouth of the TV weatherperson. She just said "Freeze". Then she really got my attention when she said "Snow". What?

Attention, please. We are supposed to start with a light frost, followed by maybe a little bit heavier frost, then freeze, but "freeze" should NOT come before the end of October. SHOULD NOT! And snow?

I've seen snow in October. I forget the year, but I am pretty sure it was on October 18th. And I'm smart enough and have been around long enough to know that an October snow is NOT the same as a January snow. An October snow would not be measured in inches, it would be counted as flakes. If it did snow later this week, it would probably be some flurries, probably wouldn't even turn the ground white, I hope. So, there is no need for panic. NO NEED FOR PANIC.

Granted, the weather person was a bit "hedgy" as she said this. She said this would not be until Thursday, and so it might change. But still! To mention these two things this early in October...

I hope this isn't a sign of things to come. Someone ask me if I had heard a prediction about this winter, and I haven't. I won't try to find woolly worms to see how furry they are or look for any other signs. What happens, happens. But I think I'll add to my list of chores today "see if the snowblower starts".

And, suddenly, I feel quite ready to clean up the vegetable garden and start emptying some containers. It's going to be a bit chilly when I start (in the 40's) but should be around 70 when I finish.

See you in the garden...

Oh, one more thing... This weekend sometime, I hope to find some time to announce the first book selection of the Garden Bloggers Book Club.
fall