Hide the Bell in the Christmas Tree 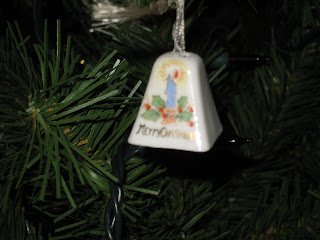 Gather around all, I’m going to tell you the story of the Christmas bell, even though it doesn’t directly (or even indirectly) relate all that much to gardening.

Once upon a time, in the 1960’s, when there were only four stations on television and holiday movies had to be watched when the networks aired them, there were five children who grew more and more anxious each day for the arrival of Christmas. They would sit around their living room and gaze at the decorated Christmas tree, wondering what it would look like on Christmas morning after Santa came and brought all their presents.

To pass the time, because back then there seemed to be extra time to pass, the children came up with a game called “Hide the Bell in The Christmas Tree”. For amongst all the ornaments on the tree, there was a tiny white porcelain bell, decorated with a little blue candle, a spring of holly and the words “Merry Christmas” written in shiny gold. It was no more than an inch tall and all the children loved the bell as their favorite ornament.

The rules of “Hide the Bell in The Christmas Tree” were simple. One child would hide the bell somewhere in the tree and then the others would try to find it. Then whoever found it got to hide it for the next round. And so it would go for what seemed like hours, but was probably 15 minutes at best.

Fast forward several decades. The children are all grown up with Christmas trees and living rooms of their own. They have all gathered for Christmas and their mother has told them they can each take an ornament from the tree to have as their own.

The four older children each took a special ornament, but left the bell alone. They would not even consider the thought of taking that bell for their very own. But not the youngest sibling. She marched up to the tree, and in one last, final round of “Hide the Bell in the Christmas Tree’, found the bell and took it for her own.

Then one day, the middle daughter was browsing through an antique store, looking at a display of old Christmas decorations, when suddenly she saw a box of one dozen white porcelain bells. And two of them were EXACTLY like the family bell. She could not believe it! Without hesitation, she bought them. She called her sister. “Can you get the bell and describe it for me", even though she knew she had found not one, but two bells like THE bell.

And they were the same! Such a find! Such joy she had over her unbelievable, improbable find at the antique store. She taunted her sister. “Ha! Now I have two of the bells and 10 others as well.” To which her sister responded, “But I have the original bell.”

But does she? The bells are nearly exactly alike, so they could easily be switched, couldn’t they? And would she notice? How well does she really know that bell? Well enough to spot it in an antique store like her older, wiser sister?

Now the grown children can play “Who Has the Real Bell” while they wait for Christmas!


Top of the box

Bottom of the box