Three Bells for My Garden 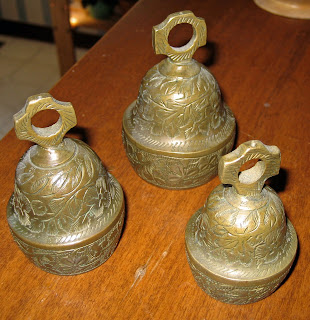 When I posted the other day about the special Christmas bell that my youngest sister stole from the rest of us, oops, I mean took one Christmas at my mother’s invitation (she’s kind of sensitive about my claiming she stole them), my older sister commented that “she had the three bells”. Argh! I had almost forgotten about the three bells, because I think she keeps them hidden from me.

Once upon a time, lovely children played in a back yard surrounded by a typical 1960’s chain link fence with one gate, the gate to freedom! On it hung three brass bells. I wonder if my mom thought she would catch us leaving the yard if she heard the bells ring? Did she know we were quite adept at climbing right over that fence? No gate kept us in.

Anyway, one day I asked my mom where those bells were, thinking, innocently, that they would be lovely to have in my own garden, in some form or fashion. She didn’t know where they were.

Turns out, my older sister took them. I don’t recall a family discussion about who should have these bells, whether they should be split up or kept together. No recollection of anything civilized like that.

So, Sunday I was going to my sister’s house and I called before I left and asked, “Can I see the bells today?” And she was very gracious and had the bells out when I got there. I got to see them, ring them, touch them, take pictures of them, and covet them. (See the picture of them above).

Then one of my nieces got nervous about me taking the bells, I guess, and took them away, back to whatever secret hiding place they have for them. I tried to talk my youngest niece into “putting the bells in my purse”, but she was having none of it, being the daughter of the one who has the Christmas bell, and thus just a bit suspicious of my motives.

I also offered my sister another family heirloom I have in exchange for the bells. It’s an older heirloom that goes back to our great-grandmother. I think the bells are a more recent addition, so I thought this was more than a fair trade. I wasn’t just trying to get the bells for nothing! She turned me down.

Unlike the Christmas bell, I have yet to find a set of these bells any place. If I do, I’m buying them and hanging them in my garden someplace, or putting them on my own gate.

By the way, the fact that I would put these bells outside is one of the excuses, I mean reasons, I mean rationalizations, that my sister has for keeping the bells. She keeps them inside where they will be safer. Plus she has three daughters, and I assume one day she’ll give them each one of the bells to have for their own.
So, my garden remains "bell-less" until I find some that are like these. No other bells will do!

(Update on the Christmas bells… I put in my 1st ever bid on eBay for a set of Christmas bells, just like the set I already had, but I was outbid, and dropped out. I’m not sure what I was going to do with a 2nd set, but for a minimum bid of $4.99, I thought I’d figure it out later. The sellers had a nice comment about how they had purchased the bells at Arth drugs in Lafayette, Indiana in 1956 for 79 cents and so I decided they must be Purdue graduates or at least from Indiana, like me.)
family