You Smell it Before You See It 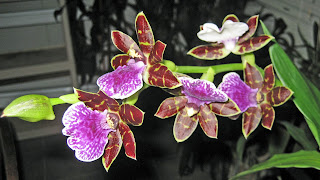 As soon as I walked into the sun room this evening to close the blinds, I could smell that something was different, something had changed. Sure enough, my Zygopetalum orchid is now blooming. That's it pictured above, in all its glory. This is the second time this orchid has bloomed for me, the first time was last year on December 23rd. I purchased it in early January 2003 in bloom and then it took two years before it bloomed again. But now I think it will probably bloom every year around this time.

On November 20, just two weeks ago, it was just some buds, as shown below.

And it has a strong smell. I would not want to have too many of these blooming at once in the same room because the scent would be overpowering and give me a headache. One is plenty.

The next orchid getting read to bloom is the Jewel Orchid (Ludisia discolor), which is now full of buds. It won't have a smell, but that's okay, it will just be nice to have something else blooming in the dead of winter.

And these blooms should last several weeks!