Stop and Look at the Crocuses

January 28, 2007
This has been one of those weekends where it seemed there was too much to do and not enough time to do it all. I've been rushing around, it seems, since getting home from work rather late, too late, on Friday.

But, I wasn't too rushed to miss seeing the first crocus bud of the season. See - right there below. 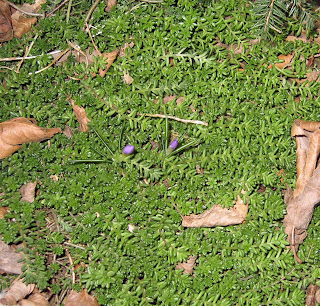 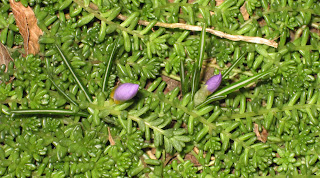 I was also at Sam's Club today and do you know what they have for sale? Summer bulbs... elephant ears, caladiums, glads, dahlias. I went by the display and first thought, "too early" and walked on by. Then a force that I can not explain made me go back by it. I looked at the bags of elephant ears bulbs. 10 for $12.67. They were kind of on the small side, but then again, 10 for $12.67. So I got them. I'm not sure where I will plant 10 elephant ears, even on the small side, but I'll figure that out. A few of them might even end up in a niece or nephew's Easter basket.

So I thought I was in the clear, ready to go with my bag of elephant ear bulbs. Then I found myself by that display again! This time I looked at a bag of caladiums. 60 for $12.67. I was thinking back to when I paid $2.49, even $3.49, for one caladium already started. These were just 21 cents each. I rationalized that even if only half of them sprouted, that was still a pretty good deal. Never mind that I don't know where I will put up to 60 caladiums. Never mind that it is January and the temperature is in the teens. I got the caladiums, too.

Both bags are now hanging up in the garage, which stays fairly warm. Later this spring I'll pot them up and see how they do.