Year of the Pea

January 08, 2007
Peas. Little green jewels of the early summer garden. Fresh shelled peas. They bear no resemblance to canned or frozen peas. They are like an entirely differently vegetable. I don’t particularly care for frozen or canned peas. I can accept them in vegetable soup or maybe a casserole, but I wouldn’t just eat a forkful of them.

Fresh peas are different, they actually taste pretty good. But you generally can’t walk into a grocery store and find fresh peas, still in the pod, ready to be shelled. You may find some pea pods for a stir fry, but you rarely find fresh peas. If you want fresh peas, you really have to grow your own.

Each year, I try to grow peas. I plant a row of peas. The vines grow. But most years I am disappointed with my harvest. I just can’t seem to grow peas.

I’m certain I go through all the right steps in planting my peas. How hard can it be? They are fairly large seeds, as seeds go. I plant them with onions, radishes, several varieties of lettuce and spinach. They all grow just fine. But invariably, at the point in time when I would expect to harvest peas, I find half filled pods or short little pods with just 3 or 4 peas in them.

I remember when I was a kid, sitting on the back patio on Memorial Day weekend, shelling peas my Dad grew in his garden. Pods and pods of them. Pods full of peas that were, well, the size of peas. How did he grow them? And why can’t I grow them?

I found an old seed packet from some peas that were a disappointment in 2004, just one year of many years of poor pea production. I won’t name the variety or seed company, as I don’t think the variety or the seed company was the problem. On the back of the packet, they wrote:

“Noted for its reliable production even under hot and dry conditions where other peas fail! Perfect for late season plantings where heat may be a problem, or for when spring temperatures suddenly turn hot. Produces a short vine that does not need trellising…”

The description was so enticing; no wonder I bought this variety. They practically guaranteed success, making these peas look easy, like a beginner’s crop. So how could I fail?

My records indicate I planted them on March 28th. According to the same records, I harvested some edible pea pods on May 28th. But I’m sure even that harvest was measured only by the handfuls. I show nothing in my records about harvesting peas, good old-fashioned shelling peas. So I have to assume that 2004 was no different than any other year, going back to 1987, my first year to have my own vegetable garden. I apparently did not harvest any peas in 2004, or harvested so few it was not even worth writing down the event.

By the way, I did note in my records that on June 19, 2004, I purchased two new hoes, the putter hoe and the plow hoe, probably as a consolation prize for failing at pea growing, again. (Or for some other good reason, no doubt.)

The answer may be someplace I wasn’t expecting it to be. I may have found the answer the other day. I have a box of old seed packets in the garage that were my Dad’s from the last year he bought seeds, 1987. And there on a packet of peas he wrote: 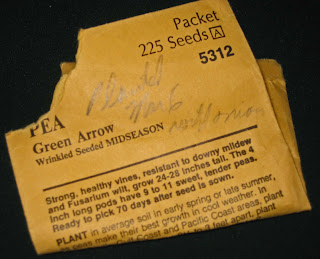 That’s the answer! And it has been hidden in a box in my garage for 20 years.

I’ve been planting my peas too late. Too late! I’ve never planted peas that early, that has to be it!

So this year, I’ve made a date with my garden for March 6, a Tuesday, to plant peas. Rain, snow, or sleet on that day will not matter. I’ll plant peas on March 6. Maybe I’ll even plant the lettuce and spinach on that day, too. And to really ensure success with peas, I’m going to plant the variety 'Green Arrow' because that is the variety of peas listed on the packet my Dad purchased 20 years ago. And I’ll plant them with onions.

It is the Year of the Pea!