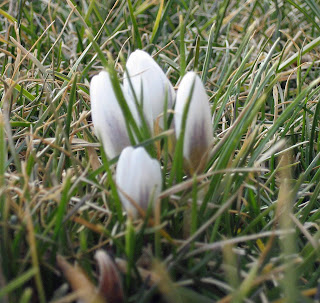 Every day, a few more crocuses pop up in the lawn. I've attempted to capture a rabbit's eye view of them instead of the straight on top view of them I posted the other day. Hopefully, these don't look like little bird eggs in the lawn! 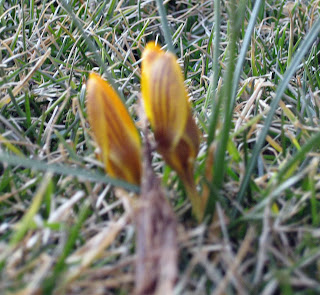 And these are some yellow crocuses. I'm not sure it was a good idea to plant these in the lawn because from the street they almost look like dandelions, especially if you are just driving by. And you know how well dandelions go over in suburbia!

Also here in suburbia, as many of you know, hidden behind my privacy fence, is my raised bed vegetable garden. 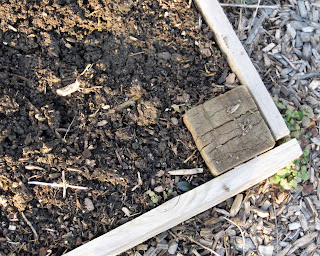 On Sunday I posted a picture of a hole I found in one of the raised beds, and many people commented on it. So I wanted to show everyone that I covered over that hole, like I said I would, and it hasn't reappeared. I was rather smugly thinking this evening that if this hole was made by a rabbit, maybe by covering it up like I did, I convinced them early in the season to "just move along, it's too hard to keep your holes here".

Then as I walked toward the other side of the garden, I scared up a rabbit hiding under some nearby Forsythia's. Dog gone it, am I going to have to prepare for another war on the rabbits? I know I have to declare war on henbit. See that bit of green in the mulch by the bed? That's henbit, Lamium aplexicaule. It comes up all over the place, in the paths and in the raised beds. I know from experience, pull it early and often or I'll soon have enough to fill a compost bin. And get it before it goes to seed! If we have decent weather this weekend, I'll have to spend some time pulling that darn weed.

But really, before I get too serious about all the outdoor gardening, the last of the snow needs to melt. Really, it's time. It's March, But I can't complain too much because I'm down to just some snow on the north side of the house and on the patio. 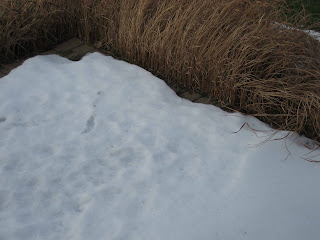 Unfortunately, the Lenten Roses (Helleborus orientalis) are also on the north side of the house under some of that snow. It is just too sad of a sight to post a picture of them right now on this happy gardening blog. Really, they looked much better in early February after the warmer than usual December and January. Some flower buds were even forming then. Now when I look, I see nothing but frozen leaves. But I remain hopeful that they'll grow out of it, and sometime before Easter, I can post a picture of a pretty Lenten Rose.

(I changed my mind... I'm showing you all my sad Lenten Roses. Brace yourself... 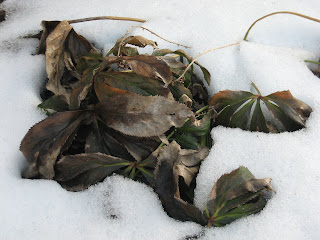 Anyone think they will bloom in time for the next Garden Bloggers' Bloom Day on March 15th?)
bulbs gardening