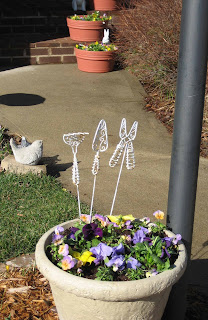 I start to look for pansies and violas in the garden centers as soon as March comes around. Last Friday, I found some at Lowes but I just didn't like the looks of them. They seemed too pot bound, so I didn't get them.

So I went looking again today and struck gold (and purple)! I found most of these at a local greenhouse called Court's Yard and Greenhouse (formerly Boston Greenhouse). The owner raised them all herself and they are some of the biggest pansies I've seen for a while. And the colors of the flowers are so clear!

I also picked up some more violas (light purple and yellow) at Lowes because I love the violas, more than the pansies. They are my favorite flower, I think. (I'm always a little relunctant to name a favorite flower, but if you were to force me to name one, I would pick violas.) In the picture above you can see that I've planted a pot of mostly pansies with a few violas around the edges and put it by the post. Then up by the steps, I have three shallow pots stuffed with violas.
Below is a tulip shaped concrete planter someone gave me. I crammed three pansies in it. 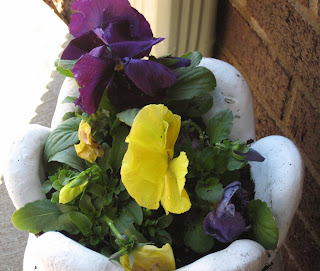 And this is my window box with pansies and violas. I did not change out the moss but will do that in May when I replant it with summer annuals. 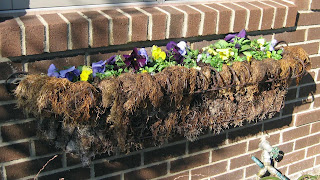 Did I mention how much I love the violas, especially? As these pots fill out, I'll be taking lots more pictures because... I love violas!
flowers