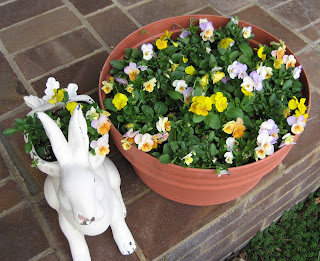 What is your favorite potting soil recipe?

Several years ago, my sister gave her 3 daughters recipe file boxes for Christmas and asked everyone to write down their favorite recipes on those little recipe cards to put in their stockings.

I stewed for days, weeks, over what recipes I should share, primarily because I don’t have a bunch of recipes written down. (Yes, I cook from memory and taste! Actually that’s not entirely true or even remotely true. I just have no “family favorite” that everyone begs me to bring to family pitch-ins. I am more likely to be asked to bring the paper plates or something like that.)

Finally, early that Christmas morning, I realized I did have one recipe to share, and so I wrote it out on the three recipe cards, one for each niece, and stuck them in their stockings.

I feel confident that they all remember which recipe I gave them because it was for my potting soil mix. Not just any potting soil recipe, this was my super-secret, highly-perfected, with carefully-measured-out-ingredients recipe for potting soil. Or something like that.

And here it is for everyone:

Dump the top soil into a wheel barrow large enough to hold the entire contents of the bag and allow room for mixing. Add in a couple of scoops of vermiculite and a couple of scoops of perlite. Cover the whole thing with some sphagnum peat moss (an amount about equal to the perlite and vermiculite combined, maybe a little more). Mix together with a small shovel or large trowel.

Now after reviewing my recipe, I've decided that it needs to be updated. There are environmental concerns about using sphagnum peat moss, since this is not a renewable resource, and there are also various concerns about vermiculite that may or may not be valid. So I may need to drop these ingredients and substitute something else.

Does anyone have any suggestions? What did they do in the old days before you could buy a 40 lb. bag of top soil? What’s your potting soil recipe? Or do you buy ready made potting soil? If ready made, what brand do you like the best? If you have too much info about your favorite potting soil to put in a comment, write a post and let me know about it so I can check it out!
soil

Alyssa said…
Hi Carol, I find that the Stein's Garden Center potting soil works very well. It's only $5.99 for a 40lb bag and is pretty much all I use. I'm not sure if you have Steins in Indiana. Scott's premium potting soil is fantastic but for me (I have scores of pots and a number of half whiskey barrels each year)the cost is prohibitive. And I agree with you that peat moss isn't a good choice anymore. You know mixing compost with cheap potting soil is another idea - if you have lots of compost. Alyssa
Wed Mar 28, 02:01:00 AM 2007

Anonymous said…
Fortunately for me, I have the soil that Carol covets more than any potting soil -- the rich soil from Dad's garden....Carol, how did he create such rich soil, that 20 years after his death, it still is amazing and even I, with my black thumb, can have amazing luck in the garden?
Wed Mar 28, 07:40:00 AM 2007

QT said…
I have not purchased potting soil in the past, always making a mix of garden soil, compost, a small scoop of sand (my soil tends toward clay), sphagum peat moss, and some sterilized cow manure. I tend to have huge pots and whiskey barrels as well, so this is the best way for me to go.

Jen Fu said…
This is not from my own knowledge, but I was just reading the Daughter of the Soil Web site and she mentions coir bricks. Here's the link to her post.

P~ said…
I didn't realize that there were concerns about either Peat or Vermiculite? I guess I'm in a bubble. I have been using a 1 : 1 : .75 mix of compost, peat, vermiculite for the last couple of years. It has worked well for me as well. I have also used the peat to "Extend" some store bought potting soil and for seed sprouting.
Wed Mar 28, 11:40:00 AM 2007

Yolanda Elizabet Heuzen said…
My favorite recipe is the following:
- jump in car
- drive to garden center
- get a big strapping lad to put the bags of potting soil in the car
- drive home
- gloat
Wed Mar 28, 02:03:00 PM 2007

lisa said…
Personally, my soil recipe changes, depending upon what I'm planting or have on hand. To mix it, I bought one of those cylinders you roll around to make cement. (Called "Odjob Mixer-$29.00 at Gurney's). Then I usually put in soil from the hole that was dug from where the plant will live (or soil I saved from some other project), potting soil, horse manure, earthworm castings, coir, and water-retaining crystals if it's a container plant. Then I roll the thing around the yard to mix, and go!
Wed Mar 28, 03:13:00 PM 2007

Carol Michel said…
Thanks all for the comments. I really am interested in what everyone does for "potting soil". Keep those comments coming and if you have more to say than fits on a comment, post something and let us know!
Wed Mar 28, 09:05:00 PM 2007

Crunchy Chicken said…
Hmmm. I use pretty much the same thing you do for potting soil. Except it's impossible to find vermiculite around here.
Thu Mar 29, 12:22:00 AM 2007

growingagardenindavis said…
I'm in the group that just purchases potting soil...the two cubic foot bag of regular potting soil and smaller bags of cactus/succulent soil or seed-starter soil. I honestly never thought of mixing my own...I'm curious if people feel the home-mixed works better and what the cost difference is?
Thu Mar 29, 12:58:00 AM 2007