Second Day of Working Outside, Be Bold! 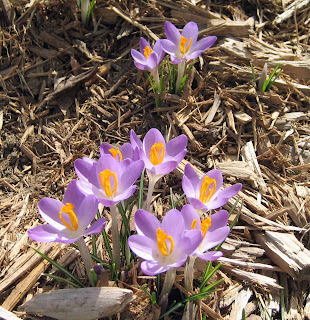 Now that the first day of working outside in the spring is past, it is time to get a little bolder in the garden. Today I boldly trimmed back some Hypericum frondosum ‘Sunburst’ (St. John's Wort) that I wrote about late last summer. The good qualities of these shrubs? Well-shaped without pruning, bluish-green foliage, peeling bark for winter interest, and bright yellow flowers in late June, early July when not many other shrubs are blooming.

The bad qualities of these shrubs, at least in my garden? The Japanese beetles love them and so did some kind of bag worm. I discovered the bag worms when it was nearly too late and though I hand picked off all that I could, the damage was done, and the die back was extensive. I’m not entirely sure if the die back was due to the bagworms, though they are Suspect Number One, or if this was just a natural die back from the shrubs being nearly 10 years old. I did have another one of these shrubs that had extensive die back in another location, without bag worms, so this may just be how these shrubs are. I dug that one out last spring.

So, with nothing to lose, I cut these shrubs back extensively today. We will see if this rejuvenates them or finishes them off. Either way, I could not leave them as they were, which was mostly dead.

Here are the before and after pictures. 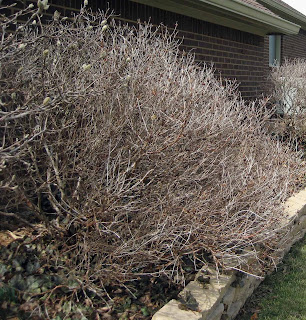 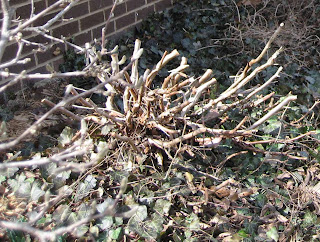 I’ve never had to do such radical cutting back in any other place I’ve gardened because I’ve never stayed long enough to get to that point. My previous gardens, including this one, all started as bare lots, and I left the first two before I had to fix any mistakes, deal with overgrown shrubs or do any other extensive renovations to any flower beds.

But now that I’ve been here 10 years, with no plans to move any time, ever, I have to fix my mistakes (primarily planting invasive plants when I knew better), remove overgrown or dying out shrubs like these, and renovate some perennial flower beds.

Does anyone have any advice for renovating the perennial flower beds? My plan is to wait until most of the plants start to sprout later this spring, then dig out the whole bed, set the good plants aside in the shade, clean out the bed, mix in fresh top soil or compost (maybe mushroom compost from the local mulch store), and then replant just what I want in there. Sounds easy, huh!? Any other ideas for renovating flower beds?

By the way, the pictures of the crocus have nothing to do with anything I've written here today, just thought I'd show some pretty flowers blooming on a sunny Sunday in central Indiana.
shrubs