Springtime: Time for Hoes and Hoses 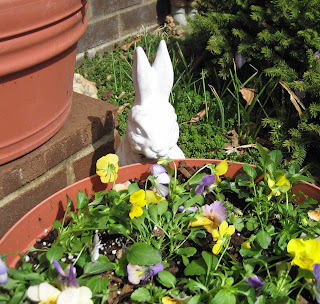 Spring arrived here this evening at 8:07 PM EST. At precisely that time, I went outside to water my pansies and violas, just as the sun was setting over the horizon. What better way to welcome spring than to steal a few minutes of the last of the sunlight to tend to my spring flowers?

I was concerned that the nozzle on the hose was starting to leak so I held it out away from me as I turned on the water so if it did spray out water where it shouldn’t, I wouldn’t get soaked. I reached down, turned the water on slowly and… and nothing came out from the nozzle.

Momentarily I thought, hey, great, the hose nozzle is fine, what was I afraid was going to happen?

Then I realized that water was spraying out from someplace all down into my garden clogs. Since it was nearly dark I could not really see what the problem was, so I quickly turned off the water. Upon investigation, I found that the hose had completely split in to two pieces about three feet from the end!

At that moment I felt exactly like I had the hose described by Karel Capek in The Gardener’s Year when he wrote, “One would think that watering a little garden is quite a simple thing, especially if one has a hose. It will soon be clear until it has been tamed a hose is an extraordinary evasive and dangerous beast…”

Dangerous beast, indeed. I’ve never had one break like that, but this is the first coiled garden hose I’ve had, and it is several years old. I guess over time, the plastic just got brittle and it broke in half. Now I not only need a new nozzle, I need a new hose.

And I’m also getting a new hoe this spring! Can you believe it? I found a hoe unlike any other hoe I have, and so I ordered it up. A little present from me to me for surviving another Midwest winter. It should arrive on my doorstep any day now… I can hardly wait to try it out.