A Tale of Two Forsythia Shrubs

March 26, 2007
Gather round to hear the tale of two Forsythia shrubs.

Here's the first Forsythia, Forsythia 'Gold Tide'. Isn't that a bright yellow? This shrub has been a star performer in the front garden since the first spring after I planted it. I've never been disappointed by its bright yellow display, which comes at just the right time to add a little 'sunshine' in the spring. 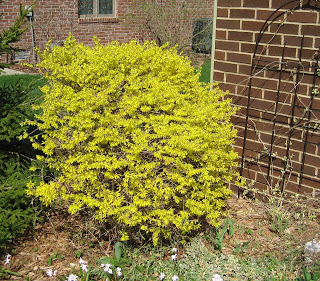 I readily recommend this Forsythia to anyone looking for a shrub that forms a nice mound that is about four feet x four feet and provides a spot of brighness in the early spring.

I can not recommend this Forsythia to anyone. After 8 or 9 years, it has never bloomed. The tag, which I still have, proclaims "Bright Yellow Spring Blooms!". Really? When? Under what conditions? The tag also has a picture that shows just green leaves. That should have been a clue, but I didn't pick up on it. And I had to buy not one, but three of these "garden dogs".

The problem is that the 'Gold Tide' Forsythia is starting to crowd out a nearby Oriental spruce (Picea orientalis ‘Green Knight’). So, once it finishes blooming, I am going to carefully dig it out and replant it someplace. It's too good not to try to save. And with the way it suckers, I'm fairly confident that it will survive. I just have to figure out where to move it to. I might just move it to the other side of the window where it is now, but that means I also have to transplant a small "Flower Carpet" white rose. And depending on where I move that, well, there could be a lot of movement in the garden if I'm not careful!

Here's a close up of the flowers of the 'Gold Tide' Forsythia. 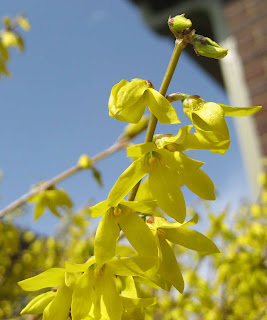 I'll also be removing the 'Arnold Dwarf' Forsythia this spring, though I won't be waiting for it to bloom first (since it has never bloomed) and I won't be transplanting it anywhere. I'll be hacking it out by any means necessary! I just hope I can get enough of the roots out to keep it from returning on me.

One other interesting fact about these two different Forsythia is where I bought them. The 'Gold Tide' was purchased at an independent nursery. The 'Arnold Dwarf' came from a big box hardware store that has a name that starts with "L" and ends with "s". You don't suppose that it was mismarked, or a dog that the wholesaler was trying to unload? Nah, that would be wrong.

Because I've written before on this blog about my Forsythia that will not bloom, my dear, sweet older sister sent me a picture of her Forsythia in bloom today. Wasn't that nice of her? In her email she wrote, "I know your forsythia does not bloom, here's a picture of mine". 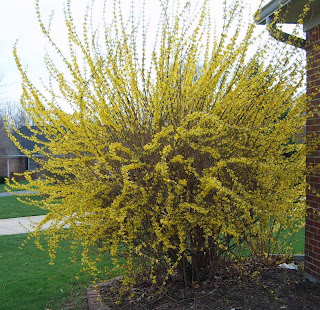 Ha! Only my 'Arnold Dwarf' Forsythia isn't blooming. I think my other Forsythia, 'Gold Tide' beats her Forysthia any day. What do others think? Page up to see that bright yellow globe of a shrub at my house. Or look here at her fairly ordinary, yawn, common Forsythia.

And she also sent me another picture, if you don't mind one more picture of some crocuses. I will concede that this is a very lovely scene with crocuses at her house. She'd better watch out, though. Next time I'm at her house, that angel just might disappear and one just like it will end up at my house! 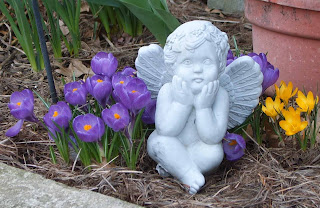