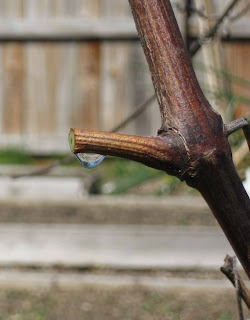 Knowing when and what to prune is something every gardener has to figure out at some point. We all learn the basics. We observe what works and watch to see what others do. Prune spring flowering shrubs after they’ve bloomed, prune summer/fall flowering shrubs in the spring. Prune trees when the wood isn’t frozen, preferably in late winter. Prune deadwood at any time.

Grapes should also be pruned back in late winter. However, the head gardener here at May Dreams Gardens (me) didn’t prune the grapes in late winter. I did think about it in early March, but then, as is well-documented, it got quite warm and the buds starting to break on the vine, and I decided it might be too late.

Then it got cold again for several weeks and I thought maybe I could prune the grapes anyway, but I didn’t. Now it is warm and nice and sunny again. Almost like summer, except it still gets cool at night.

This afternoon, I was weeding around the grape vines, and a couple of the vines got in my way, so I reached up and cut them off. I figured it wouldn’t hurt the vine, and with all the buds now brown from the cold, I’m not counting on any grapes this year.

Then I proceeded with my weeding and felt a drop of water hit my arm. What was that? Bird droppings? Nope, just water. But it wasn’t raining. Several more drops hit my arm before I looked up to see the grape vine dripping water from where I cut it off. I watched as one drop after another formed. I’ve done a lot of pruning and I've studied plant physiology enough to know basically what's going on with the plant, but I have never seen a cut like that literally drip water.

I guess that means that this ISN’T a good time to prune the grape vines.
pruning