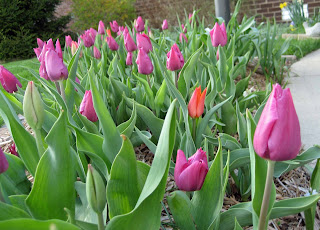 See, I plant tulips in groups, in spite of evidence to the contrary here and there in my garden.

The first year they come up in their groups. Then in the second and later years, I just get a few single tulips scattered here and there. I must pay attention the next time someone writes about which tulip varieties reliably come back each year in the midwest.

Until then, I have a lot of single, lonely tulps scattered here and there in the garden.

This pink one has a lot of foliage around it, but no other tulips nearby. 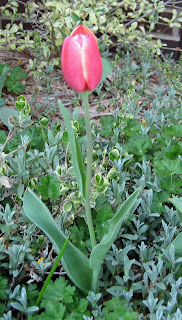 I think this yellow tulip is afraid of those hardy cactus back behind it. I'm sure it just wants to bloom and then get out of there. Those cactus can be kind of scary. I need to remove some of them because they are threatening some other nearby plants, too. 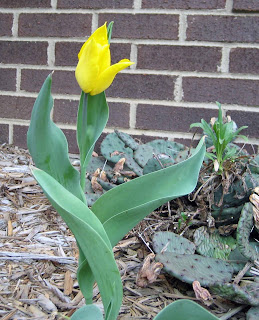 This tulip is standing tall, but standing all alone, too. As with all my tulips, I don't know its official name. I'll call it "Lonely Pink Blush", if anyone asks for a name. 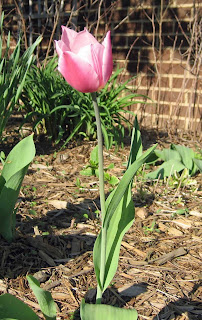 And here's a final single, lone tulip. This one has a Korean Spice Viburnum (Virburnum carlesii) nearby getting ready to bloom, keeping it from being too lonely. 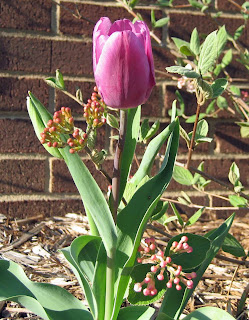 These pictures were all taken "pre-freeze", except for the picture of the group of tulips, which I took Friday afternoon, after they had been exposed to two nights of below freezing temperatures. Post freeze, the tulips are hanging in there, putting up a good fight!
bulbs

LostRoses said…
Ha ha, you forgot to name your "Scaredy-cat Tulip" with the cactus threatening from behind. Pretty funny!

Robin said…
I've enjoyed reading your blog, it is entertaining and informative. I am another Hoosier gardener, living around the Indy area. You have helped inspire me to begin my own garden blog.
Thanks,
Robin
Sat Apr 07, 06:11:00 PM 2007

sister with the homestead said…
I don't know what you are talking about....Kathy planted tulips for mom years and years ago and they still come up every year faithfully!
Sat Apr 07, 07:24:00 PM 2007

EAL said…
In full sun, the Darwin Hybrids will come back reliably. Otherwise I replace most hybrids every year or go to the species types (which I've grown to like better).
Sun Apr 08, 12:03:00 AM 2007

Entangled said…
What a coincidence - I was cleaning out a stack of old magazines last night and ran across "11 Tulips That Bloom for Years" in Garden Gate magazine.

Gotta Garden said…
They are mostly annuals here except for the species tulips. Bakeri 'Lilac Wonder', humilis 'Persian Pearl', 'Little Princess' and sometimes tarda...are the ones that do well. The regular ones (so botanic, don't you think? lol!) that have done well for me are Tulipa Greigii 'Pinocchio', Pink Impression and an unknown (mislabeled...there's a surprise...lol) which is in bud, but not bloom yet.

This year they don't seem to be lasting as long...I think it's the weather...

Yours look very pretty! Very funny...the one that is scared of the cactus (me, too!)!

Carol said…
All, Thank you for the comments and suggestions. I'm making notes and I'll be checking these comments later this summer when I order up some tulip bulbs.
Sun Apr 08, 06:21:00 PM 2007

healingmagichands said…
Tulips need to get cold during their dormant period, which is why they don't come back in Miami. When you order bulbs from a broker, they have been chilled properly so that they will bloom the following spring.

The other problem for tulips is that they are extremely tasty, both the flowers and the bulbs. So, if you have anything that likes to eat things under ground, they will go for those little hors d'oevres that you have planted. The ones that escape the buffet are the ones that come back.

I have had pretty good success with species tulips: especially Tulipa acuminata and T. humilis. I planted T. clusiana this year, they are beautiful, but it remains to be seen whether they return.
Mon Apr 09, 05:55:00 PM 2007

OldRoses said…
I heard that the problem is that tulips like it very dry in the summer or the bulbs rot. Planting them in a bed with flowers that need a lot of water during the growing season guarantees that your tulips will not survive. Best to try them around trees and shrubs that you don't water regularly.
Mon Apr 09, 11:02:00 PM 2007

lisa said…
Luckily I have great results with all my tulips-they return year after year for me. Maybe they like the reliable cold "slumber" they get up here, the cooler summers, and my fast-draining sand. But most of my sucess can be attributed to food-I sprinkle bulb food around them every year while they bloom, and amend the entire bed with horse manure every other year. (Treats them and their perennial bed-mates.) And as I'm sure you're aware-never remove the dying foliage until it's crispy brown, as the dying folige helps the bulb store energy for next year's blooms. Removing the foliage too early causes them to suffer for sure. Your drifts of tulips sure are beautiful-thanks for sharing and reminding me it's spring somewhere!
Wed Apr 11, 09:07:00 AM 2007