I Got the Vase! 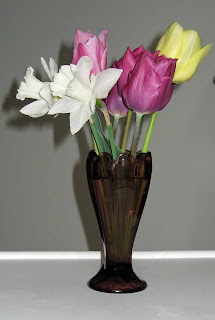 Sometimes you have to give up something to get something. And I had to give up quite a lot so I could get the one family heirloom I really wanted, this purple vase.

Yes, I have the purple vase. The origins of this vase? I'm not really sure. My mom's mother had it, but we aren't sure if she had it for long or got it from other family or just where she got it or how old it is. Somehow it just came to be in the family, and I was determined it would be passed along to me.

I know my siblings wanted it only because they knew I wanted it, so my mom held on to it while we bickered and bartered for years over who was to get it.

And finally I got it by giving up an antique clock. Isn't it a pretty vase? Wasn't it worth it?

I have another family keepsake that I'm willing to pass along to all my sisters and brother, without them having to give up anything except a little space in a sunny corner of their house. But so far, only my oldest sister has taken me up on it. It is starts of the Night Blooming Cereus, (Epiphyllum oxipetalum), that came from my aunt's night bloomer that came from my Dad's night bloomer. Can't get much more family than that!

However, I think my siblings are just a little concerned about how big mine has gotten, and that if they take a start of it, theirs will get that big, too. But my aunt's didn't get that big, I tell them, and show them, because I have my aunt's night bloomer as of last summer. She asked me if I would take it because she couldn't handle it any longer. So I took it because you can't throw away a plant like a night bloomer. You just can't.

So anyway, my oldest sister finally took one of the starts last week and I now I'm waiting for my other siblings to claim theirs, once they realize that this plant is also a family heirloom!

When my sister took one of these starts, in its cute little 4" pot, she asked when it would bloom. Ummm... not this summer, not next summer. Maybe in 3 years, if she is lucky and figures out the tricks to getting one of these to bloom, but that would be a long shot and that would make me mad if hers bloomed that soon. I've had mine for 20 years and I am just now starting to understand it, and what makes it bloom. It has bloomed 3 times in those 20 years.

Here's my night blooming cereus. Really do you think this is too big for a houseplant? 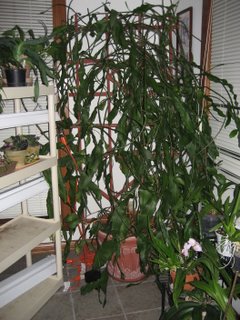 Because if you take care of it, you get this! 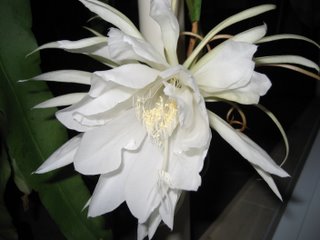 A family heirloom you would not soon forget!