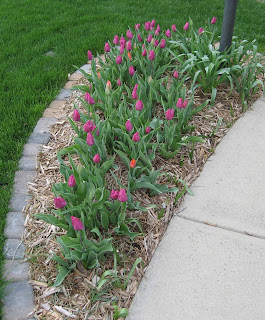 Let's look at the positives first. After a night of freezing temperatures and a cloudy, cold day, the tulips don't look so bad. They are all upright and not too much clashing orange, yet.

The star magnolia (Magnolia stellata) was in full bloom last week, when I took this picture, so it was just about finished with its big spring show before the cold hit and I got to enjoy it for a week or so. That's a good thing because... 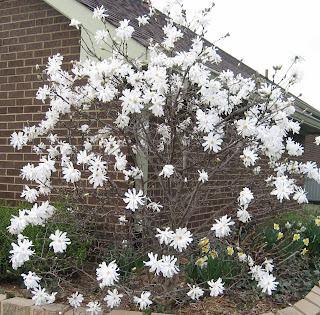 ... after last night, it doesn't look so good. It looks quite miserable. 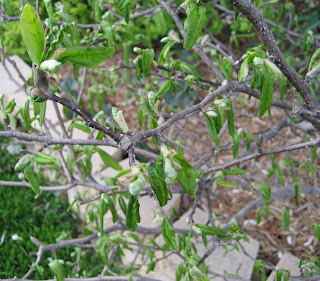 And this is a picture of the crabapple blossoms after the cold night and day, taken at about the same spot where I took a picture yesterday to put on yesterday's post. It's not like the blooms are black or anything... yet. 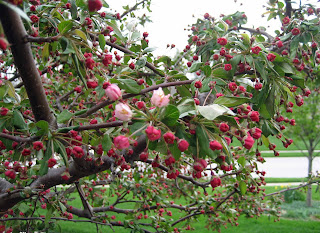 But this lilac (Syringa vulgaris 'White Angel') doesn't look at all happy with the cold. I'm not expecting it to bloom wildly this year. It is a white variety and has never been what I would call a "big bloomer" anyway. (By the way, that white cloth covered area behind it is NOT my attempt to protect the peas and lettuce and all from cold, it is an attempt to protect them from the bunnies.) 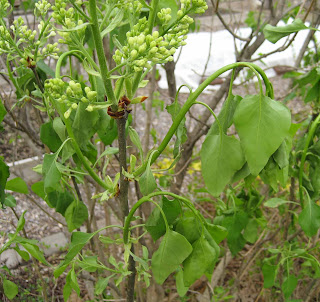 And here are some perennial daisies of some kind. Once things warm up again next week, I'll need to trim these up a bit along with other perennials nipped by the cold , and they'll come out of it all right. 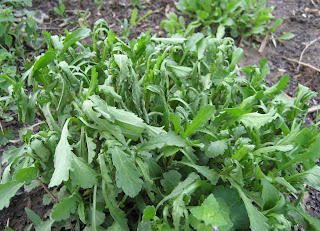 This has happened before. Based on my gardening journal, we had similar weather in 2002. I don't think it got quite as warm in late March that year, so plants weren't quite as far along, but it got very cold in early April, and we had a frost on May 19, 2002. That last frost in May wiped out my tomatoes and peppers and I had to go and re-buy all new. Now I always wait until after May 19th to plant the vegetable garden, even though our frost free date is listed as May 10th.

In 2005, on both May 2nd and May 3rd, temperatures dipped below freezing in the early morning. I remember when that happened, too. I should, it was just two years ago. We weren't without flowers and leaves and butterflies and bees that summer, so everything and everyone pulled through.

And finally, my grandmother wrote in her diary that they had frost on May 25, 1925 in Indianapolis. Now THAT would be bad.