Renovation of a Flower Bed - Completed

April 22, 2007
In the spring, there are slivers of time when the sun is shining and the ground is dry enough to work when you just have to make time to work in the garden. I took advantage of one of those slivers of time today to finish renovating my perennial flower bed. I had already widened it earlier this spring, and was just waiting for this kind of day to complete the renovation. Here is the bed at approximately at 10:30 this morning, right before I started to dig out the perennials. 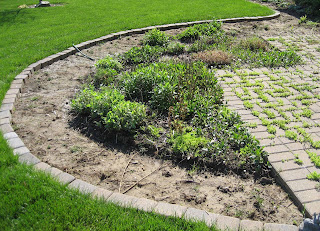 Two hours later, I finished digging out all of the plants. That took a bit longer than I had hoped. 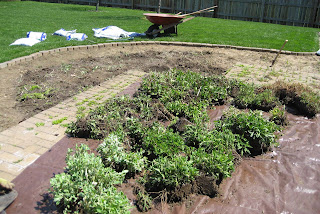 Two more hours later, around 2:30, the ground was prepared for planting. It didn't take me the whole two hours to do this, as I was taking a lunch break for part of the time. I did not attempt to completely overturn all the soil, I just roughed it up a bit with a spading fork and a hoe, and then added some black top soil on top and raked it all smooth. 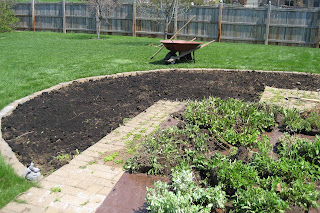 Guess what didn't take all that long? That's right, replanting the perennials took me only 45 minutes. This included going around to a few other flower beds and digging up some other perennials that were either crowded out where they were or that I just wanted to put in this bed. And look, I have some left over plants, still on the tarp on the right hand side of this picture. 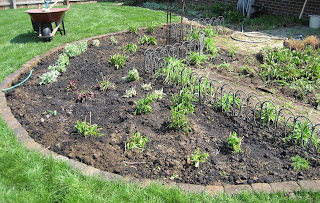 Here's the finished bed, after adding mulch. I used cocoa hull mulch, which smells yummy, like I was baking a big chocolate cake outside. 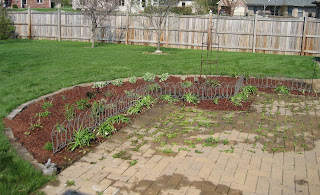 By now it was about 3:45 PM and I was starting to fade a bit. Please note that the tall obelisk feature is only there as a place holder. I intend to put a better feature there, but haven't had time to shop for it. Also, those aren't weeds in between the bricks on the patio, that's some sedum and thyme. It won't look so messy once I add the furniture and a few pots.

The leftover perennials were primarily Black-eyed Susans, False Sunflower, Shasta Daisies and some Autumn Joy Sedum. I decided while digging them out that they were not well enough behaved to go back in that bed (except for the Shasta daisies and Autumn Joy Sedum, they are well behaved, but I just had too much of them). So I planted most of them in another perennial bed that is a bit out of control anyway. They'll fit right in. And, yes, some of them ended up in the compost bin. There is only so much room for Black-eyed Susans and there were some geraniums that were too infested with grass to save, especially at the end of a project like this when the gardener is tired. They weren't all that spectacular, anyway, so I hope I don't regret tossing them.

I do work fast on projects like this, but take several little mini breaks. I've been gardening for "awhile", so I know basically what I need to do, and how I want to do it so I just dig in. I also generally work alone, so there are few distractions. I will say that on this project, it would have been nice to have someone there who could have helped with some design decisions. But, there wasn't anyone around, so I designed as I planted as best I could. If something doesn't look right later, it will be fairly easy to dig and replant, right?

If we don't get too much rain this week, next weekend I'll replant the hosta bed that runs along the back of the house and connects in to this bed. The show plant of that bed will be the giant hosta I got from my sister last year.

And finally, before I finish up this chapter on the renovation of this perennial flower bed, I have a few family members to thank for making today possible. They know who they are. I'll make it up to them some day when it is raining!
perennials