May 29, 2007
Excuses present themselves all the time, excuses for why you can't do one thing or another in the garden. It's too hot, it's too dry, it's too wet, it's too cold. It's too early, it's too late.

Or my new favorite..."there's a bird's nest over there that I don't want to disturb". 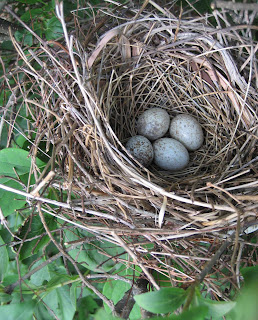 This evening I found a nest of eggs in my 'Miss Kim' lilacs, about five feet off the ground. Does anyone know what kind of bird this is by the seeing the eggs? Mama bird was way up on the neighbor's roof squawking at me and telling me to get away while I carefully parted the branches and took this picture. Now I have an excuse for not pruning off all the seed heads on the lilac. It's a tedious task but I think it increases the next year's bloom when you do it at the right time.

Later, I found my neighbor's cat, Jake, lounging beneath my grape arbor, back by the vegetable garden. 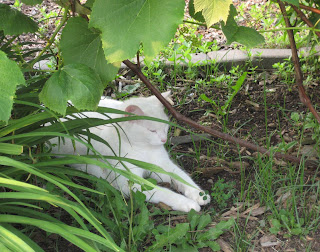 I praised Jake for helping keep the rabbits out of the garden, and told him he was most welcome to stay for doing such a good job. He's a sweet kitty. Then I went about my business, never thinking to check the vegetable garden for rabbit damage, as Jake seemed to have the situation under control. (Yes, those are dandelions and grass growing in that bed, but thank you for being kind and not noticing or saying anything about that.)

Later as I was wrapping up my work in the garden this evening, which including mulching around the trees and watering the container plants, I decided to quickly check the vegetable garden to see if my squash or corn or beans were coming up.

What I saw was not pretty. Brace yourselves... 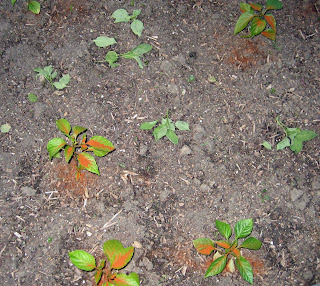 The bunnies have eaten off at least six tomato plants, six pepper plants, and all but one eggplant plant, maybe more. The picture above is of the pepper plants after I dusted them with cayenne pepper. The ones without pepper on them are the ones the bunnies chewed off. And they don't even eat the whole plant, they just bite it off.

What is Jake's excuse? I left him in charge! He was supposed to be keeping the rabbits out of the garden.

Fortunately, the corn and beans have row covers on them, so the bunnies can't get to them, and they are sprouting. The squash is not covered, so I sprinkled them with cayenne pepper, too.

Any other suggestions for keeping the rabbits away?

But lest you think that May Dreams Gardens is just about excuses and ravishing rabbits...

Here's some Beard-Tongue blooming in my renovated perennial garden. 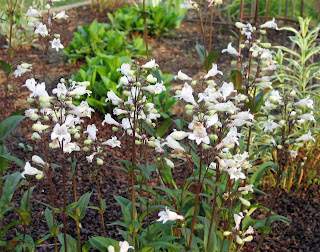 And I picked more strawberries yesterday, a big bowl full. I'll be eating these all week, and I think there are this many more berries ready to pick today. 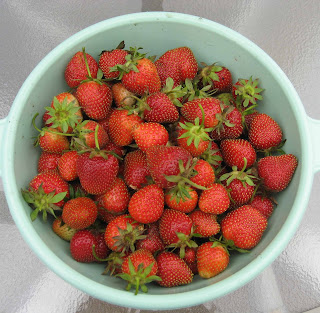 The variety is 'Ever Red', and I hope they produce some berries all season, though I know most of the berries will be ready to pick this week.

And that's today at May Dreams Gardens.

What excuses do you have?
gardening rabbits vegetable garden