Gardening in the Racing Capital of the World

Wonder what it is like to garden in the racing capital of the world?

When you live in Indianapolis, you can’t help but learn a little about Indy car racing and race car drivers because of all the media coverage throughout the month of May. No information is deemed too trivial to talk about or write about if it relates somehow to the Indianapolis 500.

Finally it is “race day”. All morning, all three local network stations have been broadcasting extended news coverage from the track to give updates on the traffic, the crowds, the celebrities, and the weather. And this morning, the weathermen are getting the most air time as they try to predict if there will be enough dry weather to run the race.

Yes, we are finally getting much needed rain in central Indiana today. We’ve had some periods of rain since Friday, but now it looks like it is really going to rain. We definitely need this rain and I’m happy to hear it on the roof and see it watering the garden. If we hadn’t gotten this rain, I was going to have to haul out hoses and sprinklers and start watering everything. Ugh, I hate to do that!

But out at “the brickyard”, “the Speedway”, “the 500”, whatever you want to call it, I would guess this rainy day isn’t making anyone happy.

Did you know that the race is blacked out on TV here, so the only way to see it is to either go someplace where it is on TV (anywhere in the rest of the world) or go to the race in person? Growing up around here, we all listened to the race on the radio, and for the longest time I thought that’s what everyone did, until I realized it was live on TV worldwide, but just not for us.

So I’ll listen to the start of the race on the radio. The big highlight will be the singing of the chorus of “Back Home Again in Indiana” as part of the starting ceremonies. Right then, that moment, will signal the beginning of summer for me.

Then I’ll go about my business in the garden, which today, if the rain let’s up, will probably be the business of weeding. I still need to clean out these non-performing forsythia and the weeds that have grown up around them. It has become a terrible mess! 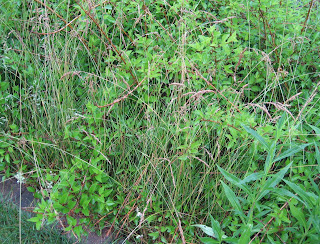 Or maybe I'll paint my garden bench or finally use those 15 bags of mulch that have been piled up on the patio since last fall. But whatever I am doing, and whenever it is dry enough to start the race, I'll stop and listen to the singing of "Back Home Again in Indiana", so I don't miss my own official start of summer.

Back Home Again in Indiana

Back home again in Indiana,
And it seems that I can see
The gleaming candlelight, still shining bright,
Through the sycamores for me.
The new-mown hay sends off its fragrance
Through the fields I used to roam.
When I dream about the moonlight on the Wabash,
How I long for my Indiana home.

If you would like to hear Jim Nabors sing this sacred Hoosier song, accompanied by the Purdue University Marching Band, here's a video. It's the wrong race, but you get the idea...
gardening weather