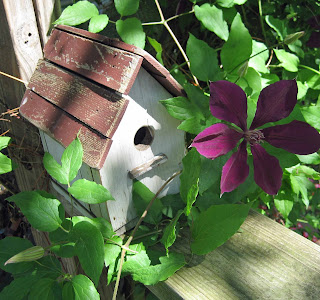 Do you ever get overwhelmed by all you need to do in your garden? Weeds to pull, flowers to dead head, mulch to spread, shrubs to dig out, annuals to plant, seeds to sow, the list seems endless at times!

My sister was feeling overwhelmed by all she wants to do in her garden and her time is limited. The picture above is of a simple bird house with a clematis vine wrapped around it sitting on a ledge on her gazebo. A gazebo! I don't have a gazebo. Do you? If I did, I'd love having a garden accent like that on one ledge and that's where I would spend my time.

Here's the advice I gave my sister.

Stopping thinking about EVERYTHING that needs to be done or that you want to do in the garden. Instead figure out what you can do in 15 or 30 minutes, when you have time, and then go do just that without thinking about everything else. It's a little time-management mind game.

For example, I'll tell myself to just weed for 15 minutes or until the container I have is full, whether that is a wheelbarrow load, a basketful or a trash bag full. Or I'll think, "I'll just weed from here to there" maybe a distance of 10 feet and then I can stop. Then I do just that and stop and decide if I have time or the desire to do more. I don't look at the whole bed and think how long it might take to do the whole thing, because most times you won't have that much time to spare all at once, so why go on thinking you will someday?

Enough of these 15 minute sessions and pretty soon, you see some real progress.

Of course, you don't want to be like one of those people who stop to mow their lawns when a hurricane is swirling out in the Atlantic heading right toward them. You have to prioritize and make sure the urgent matters are attended to first, like making sure the chairs in the gazebo all work, which you do by sitting on them and relaxing with a good book and a tall lemonade.

And occasionally you do have to plan enough time to do an important big project, like spreading mulch, or replanting an entire perennial bed, or building a gazebo, but you won't do those kinds of projects every day.

Other high priorities include, for example, getting rid of poison ivy, making sure prized perennials aren't being overrun by weeds, planting the vegetable garden before the fourth of July, planting trees, watering if everything is parched. Stuff like that.

Speaking of watering, I have some neighbors who are already running sprinklers on their lawns. I'm not talking about those people who have irrigation systems and turn them on in the spring and off in the fall and so end up watering nearly every day rain or shine. I'm talking about neighbors who have to go to some effort to drag out hoses and sprinklers and position the sprinklers just right so they aren't watering the street or their driveway.

It is a little dry outside, even though we had some rain last Wednesday. Regardless, I think these neighbors are making a mistake. May is not the month to be "babying" the grass and having it think there is an endless supply of water right at the surface, so that's where the roots stay. No! The lawn must not be babied along like that. It needs to learn to send those roots deeper for moisture, so that when it is really dry out, in July and August, it has a better chance of surviving without additional watering.

That's what I do with my lawn. I even let it go dormant mid-summer and only if it is really, really dry do I do some watering in late August-September, when it starts to cool down in the evenings. And I've not lost it all to a drought yet.
gardening lawns