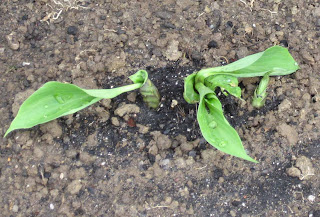 For this hosta, I dug out and replanted my entire bed of hostas.

It doesn't look like much now, but when it grows up, it will be quite large. It's a passalong that I got from my sister last spring. Unfortunately, I didn't have a good place for it last summer after I moved it it to make way for some miniature hostas, so it's been in a container until today.

Oh, and the reason it looks all mangled? It was in a big clay pot, and when I tried to slide it out of the pot, the whole thing ended up root ball on top, which is wrong. But I'm confident it will pull through. If it doesn't, I'll just go back to my sister's and get another division. In spite of her concern that when I divided this last spring, I took the nicest division, I left her with TWO plants and even planted them in two different locations. She's got plenty to share.

Here's the hosta bed right before I started digging. I did widen the bed earlier in the spring so I would have plenty of room for the Big Hosta. 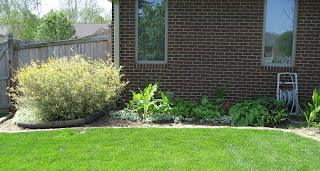 First order of business was to dig out all the hostas. I did leave two hostas that were more or less where I thought they should be, which is good because I thought the one on right was too far along to move this spring, anyway. 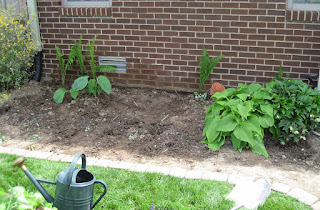 Here are all the hostas I dug from that bed and long with some variegated dead nettle (Lamium maculatum 'Beacon Nettle'). Dead nettle is a terrible name for an innocuous little ground cover, don't you think? 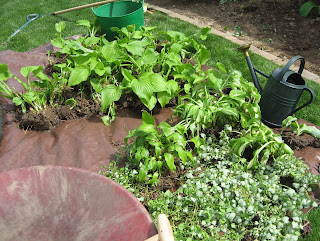 And now, fast forward through amending the soil with bags of top soil, raking it all smooth, dividing and replanting the hostas, watering, mulching with cocoa hulls (remember, poisonous to dogs!) and watering again to get this finished bed. 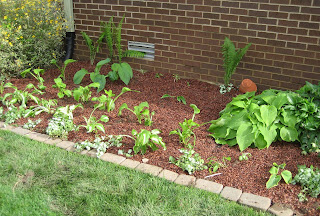 I promise that little tiny hosta with all that room around it is going to get really big. It's going to be a show stopper!

And here are the leftovers. These are primarily some basic old fashioned "August Lilies" that I got from my brother and sister-in-law and moved from my last house to this one via another friend who let me plant them in her garden temporarily. I believe I've had these for about fifteen years. 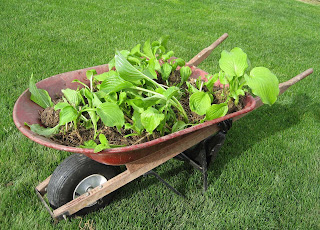 I found places to plant the leftovers at my neighbor's. I promise, none of them ended up in the compost bin.

Tomorrow? Look at this weather forecast. This is from one of those weather email updates that you can subscribe to:

Dear Carol,
If you happen to have the day off tomorrow you are going to be thrilled with the weather as sunny skies propel afternoon temperatures into the mid and upper 70’s. A desert-like atmosphere hangs with us for a while meaning cool mornings and warm afternoons. Dry weather dominates until late week when a few t-storms will be possible. ...
Sincerely,Meteorologist Jude Redfield

I am thrilled. I happen to have the day off tomorrow, and the day after that, and the day after that... the whole week! Looks like the weather is cooperating. I think I'll dig out the shrubs in the front garden bed tomorrow and plant them someplace else and then prep that whole front bed to plant something else there. Won't that be fun!

But I'll need to be careful and quick about it, because right in the middle of that bed is a crabapple tree with this robin's nest with four eggs in it. Mama bird does not like it when I am around. She'll be squawking at me the whole time. 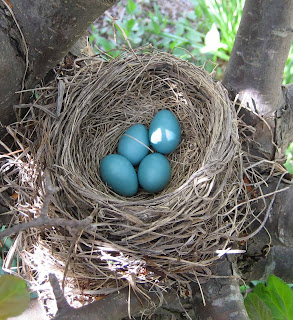