My Best Peas Ever? 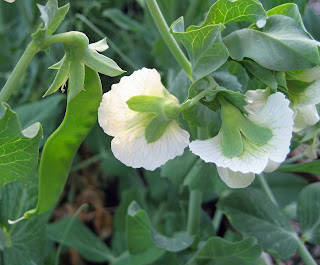 Are these my best peas ever? This is somewhat embarrasing to admit, but I've never been all that successful at growing peas. Some years the bunnies eat the vines to the ground before they have a chance to flower, or the vines end up so short from bunny nibbling that the few flowers that do form pea pods don't seem like they are worth the effort of finding and harvesting.

Other years, I lose track of time and before I know it, I've got dried peas on the vine. Or I plant too late and it gets hot and the pea vines wilt and the few pods that form are small and have one or two peas in them.

But this year? I think this will be my best pea harvest yet.

It won't be a lot of peas because my row of peas is only eight feet long. But I think it will be enough to actually taste the peas.

And what has been the difference?

The wisdom of an experienced gardener scrawled out on an old seed packet that I found in a box in my garage. You might remember me posting about that in January, when I boldly declared, on that cold winter night, that this was to be the Year of the Pea.

The seed packet I found was the from the last peas my Dad sowed before he passed away twenty years ago. I learned two things from that packet. Sow early, and get the variety 'Green Arrow'. And from others' comments to my post about the Year of the Pea, I decided to add an innoculant to the soil.

See how many peas are forming in these pods? 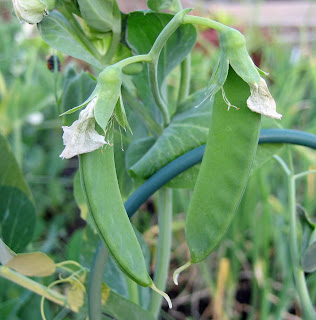 It's a critical time now. I need to water frequently, I think, so the peas are nice and plump. 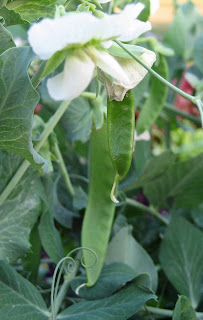 I also need to watch out for the rabbits. See that little bite out of that pod? That is no doubt from a rabbit. I saw a rabbit in the garden yesterday when I went back there to plant the tomatoes. They are eating my food. I am at war with them.

One of my tactics to keep the rabbits away is to set out this fake owl, which I have been doing faithfully for many years. But it doesn't seem to scare the rabbits one bit. That's what I get from trying to get garden wisdom from a marketer trying to sale fake owls as a cure for rabbits. It is just a decoration at this point.

Where do you get your gardening wisdom? I'm convinced that the best source of gardening-know-how is to talk to an experienced gardener, one who has learned from other gardeners before them and from their own trial and error over years, if not decades, of gardening. Watch what they do, see when they plant, find out what varieties they like to plant. Then maybe you won't have to wait so many years, like I have, for a decent handful of fresh garden peas.