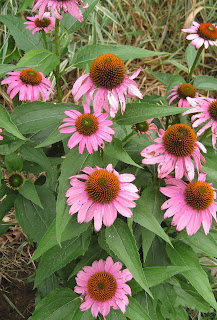 Is it just me, or do the coneflowers (Echinacea purpurea) seem to have a little deeper color this year? I wonder if it is due to the lack of rainfall?

Wait, I wasn't really out in the garden to take pictures of the coneflowers. I was heading back to take some more pictures of my sweet corn and the coneflowers caught my eye. Sometimes I think I have "GADS", garden attention distraction syndrome. I go outside with one gardening task in mind, see something else to do and say "Gads, I gotta get to that big tall weed" or something like that. Then I end up doing about five other tasks before I get to the task of the moment or even remember why I went out to the garden in the first place.

When I got up this morning, I decided that I needed to thin out the sweet corn to increase my chances of getting a few ears of corn from my "tiny by corn standards" patch of sweet corn.

I thought about going out early in the morning, but I was already dressed for work and I knew if I went out then, I'd get all dirty. When someone comes into work with baby spit up on the back of his or her shirt, everyone just smiles and nods knowingly accepting that it is just part of being a new parent. But if a gardener shows up to work with a little dirt on her knees, people wonder what kind of slob she is. There is no recognition that sometimes there are unseen forces that carry you out to the garden at odd times, when you don't have on the proper clothing, and before you know it, the knees of your good slacks are dirty.

So I waited until after work to go out and thin the corn. 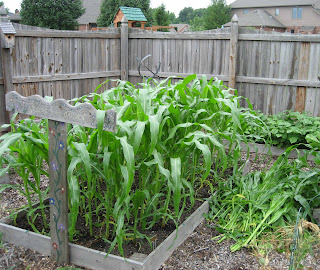 I think this will give the remaining corn a better chance of tasseling and forming ears, but still provide enough corn for pollination. But I'll admit my expectations are low. Just two, maybe three good ears is all I ask for. Then I can start boiling some water, run out and harvest my sweet corn, shuck it, throw it in the boiling water, and cook it for just a few minutes, so it is as sweet as possible. I wouldn't want there to be one extra minute for the sugars to turn to starch.

It took some willpower to thin out the corn. How did I do it? First, it was threatening to rain when I got home, and in spite of the lack of rainfall, I had to wish that it wouldn't rain for just a little while long. That was hard! Then I cut the stalks off rather than pull them out so I wouldn't disturb the shallow roots of the remaining stalks. I kept my eyes at the base of the corn and cut back based on stem size and spacing. I didn't concern myself with height. Cut and remove, cut and remove, down through each row. 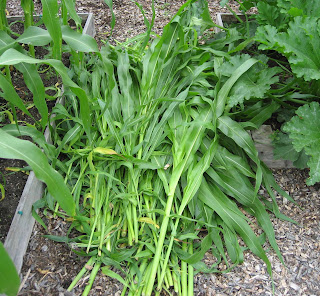 Now I have enough corn leaves to thatch the roof of a tiki hut, Hoosier style.

But more importantly, I hope I've improved my chances of harvesting a few good ears of sweet corn.