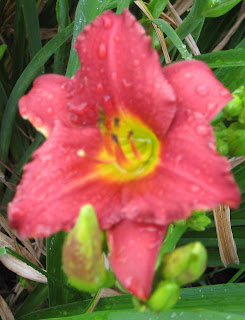 After doing some research and reading several blogs, I've confirmed my diagnosis.

I have Hemerocallis defiencii, otherwise known as Daylily Deficiency Disorder.

Symptoms? I do not have enough daylilies in my garden and I have far too many 'Stella D'Oro' daylilies.

I'm posting the evidence here. These are the only four daylilies I have, other than common Tiger Lilies and good ol' Stella and a daylily that isn't even blooming yet and shows no signs of blooming (I bought it at a big box store, it might be 'a dog'.)

This first one, a little blurry because I was in a hurry due to it starting to rain, is 'Pardon Me'.

Then there is 'Siloam Double Classic', my only double daylily, and I just got it last year. 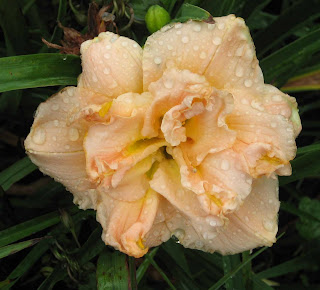 Here's 'Hyperion', a nice clear yellow, but a bit of a yawner compared to some daylilies. 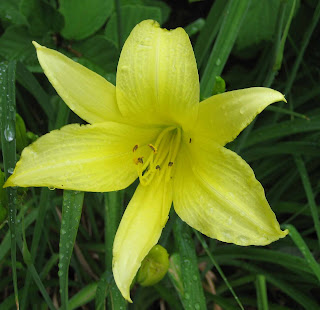 And 'Fairy Tale Pink', which has a few ruffles but not very many compared to other daylilies I've seen pictures of. 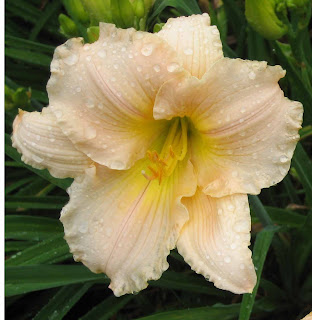 Comparing my daylilies to those of garden bloggers like 'Gotta Garden' is like comparing a tin shack (me) to the Taj Mahal (Gotta Garden). If you check out this post of hers and look in the comments, she has offered some excellent advice on how to cure 'Daylily Deficiency Disorder'. It involves getting more daylilies, of all things. I hope it is not too late for me. I plan to start working on the cure this weekend!
perennials