Did I Catch A Rabbit Today? 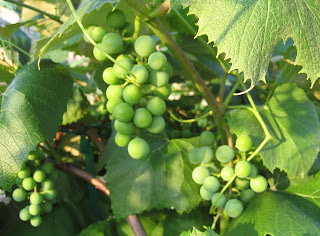 As soon as I got home from work, I went out to the vegetable garden to check the rabbit trap to see if I had "caught me a rabbit" today. (See yesterday's post.)

I had not. But I do think the mere presence of the rabbit trap has kept Mr. Rabbit and his family away today. I can just imagine him telling the missus and their bunny babies, "We need to stay away from Carol's gardens for a while because she saw me yesterday and wasn't too happy about me eating the beans. Now she's set that trap and it is just too dangerous for us right now. Wait until she gets distracted by something else, and then we can go back."

There's quite a bit to distract me in the garden right now, starting with the grapes. I am going to have a lot of grapes this year. I should probably start lining up people to give these to since I don't cook much or make jelly or preserves. I just hope the Japanese Beetles, who generally find these grape vines right away when they emerge in late June, were killed off by the April winter weather or find it too hot to eat this summer.

Then there's the corn. We were taught growing up that corn should be "knee high by the fourth of July". 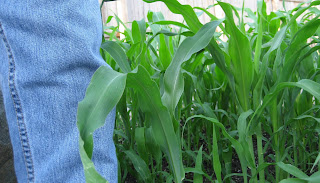 My corn is knee high now, so I wonder how tall it will be on the fourth of July? My other corn crop at my second garden needs water according to my sister, so I don't think it is knee high yet. I'll have to check into that this weekend.

I won't be doing much more watering of the lawn for awhile. This morning the water company asked people to water on the odd-even system. If your house number is an even number, then water on even-numbered days. Then this evening, the water company annouced through the media for everyone to voluntarily stop watering lawns until we get some rain.

They say it isn't a capacity problem, there is plenty of water. It is a distribution problem, that we lack the infrastructure to get water to everyone with a high enough water pressure. That makes it dangerous if there is a house fire to be put out, if the water pressure is too low.

So the neighbor down and across the street, with an odd numbered address is watering his lawn this evening, on an even numbered day, and on the first day when we aren't supposed to water lawns at all. They must be better than all of us, exempt from the rules that we "less neighbors" follow. I don't know them well enough to go down and tell them to "get with the program". I just hope the other neighbors with automatic sprinkler systems turn their systems off, and don't also consider themselves exempt from the ban on watering.

In a few weeks, we'll know who is following the watering rules and who isn't! Personally, I like the ban, as it takes the pressure off (no pun intended) having a green lawn when it is so dry out.

But enough about the water situation.

The vegetable garden is starting to look like a real garden and not just raised beds of dirt.

This is the view looking east with the sun behind me. I wish the cucumbers were a little bigger (bed on the lower right) 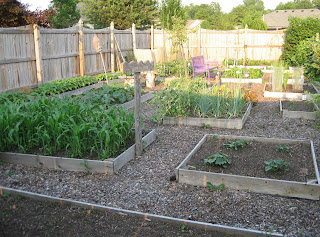 And here's the view looking back to the west. Those three narrow beds along the right are the beans. You can see the rabbit trap in the first bed. 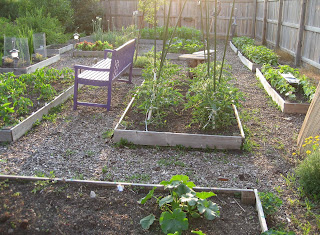