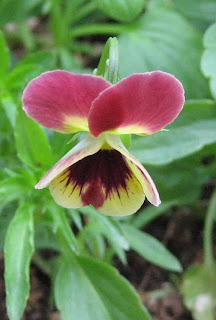 It's time to confess what seedlings we all still have that weren't quite timed properly or never made it to a "grown up pot". I know from posts in January that there are a lot of gardeners, including me, who do a lot with seeds.

I can not be the only one who still has seedlings that haven't been planted in a container or flower bed at the end of June.

First up, I have the violas. Usually, every other year or so, I get the big idea that I'm going to grow pansies and violas from seed, and sow them early enough that they are blooming and ready for containers by mid-March, in Zone 5, just like the ones that show up at that time in the big box stores and local greenhouses.

So far, I've never gotten the timing quite right. My violas from seed are just now blooming and are still in the original flat I sowed them in.

But aren't they pretty? It's Viola cornuta 'Arkwright Ruby'. (Wait, that close up looks like the flower is sticking its tongue out at me! I just noticed that.)

I think I'll pot these up now and see if I can keep them through the hot summer so they can be part of a fall planting. Then I can tell people that is what I planned to do all along. 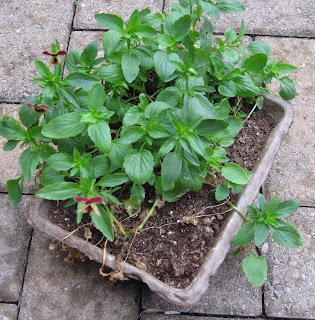 Then there are the Foerster's hybrid delphinium seedlings all potted up in three inch pots but not quite ready to be planted out with 'the big plants' in the wilds of the perennial bed where I intend to plant them. 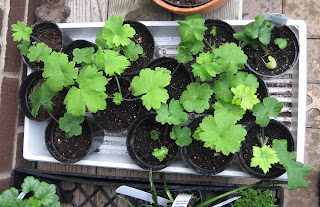 I left these inside under lights for far too long. I finally set them out a few days ago when it started to cool down a bit. Once I give them a little fertilizer, I think they'll be fine. My plan is to plant these out in early September, which will hopefully give them enough time to establish themselves before they go dormant. And by waiting until then, it will give me a few more months to prep the flower bed for them. Then next summer, will I have some delphiniums in bloom? I hope so!

However, this is my first time to try Delphiniums from seed, so if anyone thinks that my plan is all wrong, let me know now, not when I post about about a tragic loss of Delphiniums in the spring!

What seedlings do you still have? I think there are a lot of gardeners who always have some seedlings or cuttings or other experimental plants scattered about. I keep mine on the patio, where I can keep an eye on them. That's why my patio will never have that "finished" outdoor room look that you see in magazines pictures. I'll always have a few little flats of plastic pots with something or other growing in them tucked in among the container plantings.

In fact, I'm just a little bit suspicious of a gardener who has no seedlings or cuttings that they are still nurturing along in the middle of summer. Really, who gets absolutely everything planted in the spring?