Hats in the Garden 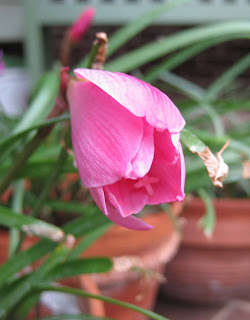 The fairy lilies (Zephyranthes sp.) are starting to bloom. Some people call them rain lilies because they tend to bloom after some rain, but I prefer to call them fairy lilies.

I don't know if I read it or dreamt it up, but I think they are called fairy lilies because these are just the type of flowers that the garden fairies are likely to pick and wear for hats.

Here in Zone 5, I grow these lilies in containers and overwinter them in my garage. I have two types, this darker rose colored one that I got from my aunt and a lighter pink variety that I bought.

I have other flowers blooming now that the garden fairies probably use for hats. I haven't actually seen a garden fairy wearing one of these flower hats, or for that matter even seen a garden fairy, but there is evidence that they are out there. (I'll go into that more in another post.)

Back to hats... here is my shrub-type clematis, Clematis integrifolia 'Alba'. Those white flowers, with their bell-shape, would also be good fairy hats. 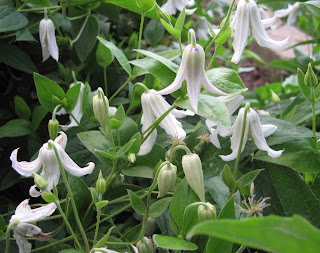 However, they are white, so I doubt that any self-respecting fairy wore them before Memorial Day. Those fairies do have some fashion sense.

This daylily has a good shape for a hat, but I think it would be a little large for a garden fairy. 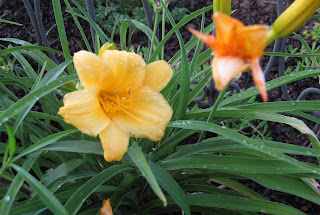 Or let's just say if there is a garden fairy in my garden who is big enough to wear one of the daylilies for a hat, I'd better be a bit more careful about what I say about the garden fairies or accuse them of doing.

There is one hosta getting ready to bloom; the florets of the hosta bloom could be hats for the tiniest fairies. 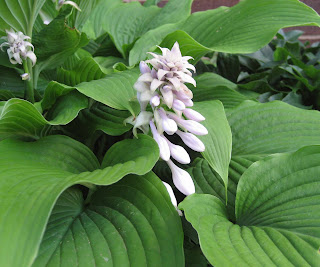 I'm thinking this hosta is blooming a bit early, but I'm not sure. As spring moves into summer, I tend to get lax in recording when different flowers start to bloom, so I don't have records to refer back to on when the hostas bloom. I do know that I'll have hostas blooming throughout the summer, culminating in the traditional 'August Lilies', which bloom, guess when?

These are the hats I wear in the garden.

There is no flower big enough for my head, though there have been recent suggestions that I wear a crown of pea vines to commemorate my pea harvest!

On the left is a traditional wide-brimmed straw gardening hat. It does a good job keeping the sun off of my neck and out of my eyes. I used to think only "old lady gardeners" wore hats like this one, but I'm over that, and I ain't that old.

On the right is a ball cap I wear sometimes when I mow the grass. They gave these away for free at Indiana Pacer's basketball games a couple of years ago, if you signed up to be entered into a drawing to be the "Chevy Fan of the Game". I did that half a dozen or more times, so I have a lot of these hats. When one gets dirty, I toss it out and bring out another one.

Anymore, if the sun is shining, I'm wearing a hat, it just makes good sense to do so.

So what hats do you wear in the garden?
fairies flowers gardening