I Only Got One Mini Hosta! 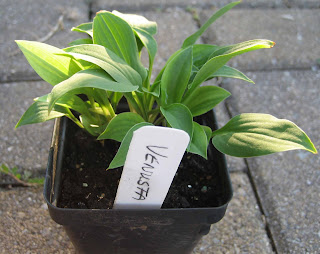 The American Hosta Society 2007 National Convention is in town this week.

The vendor sales area is open to the general public.

My goal was to get two new miniature hostas for my miniature garden.

I fell short of my goal and only got one miniature hosta, Hosta venusta. It's a species hosta and fairly inexpensive, compared to some of the hostas there.

I've always admired gardeners who focus in on one genus or group of plants, and I found myself in a room full of them earlier this afternoon. As one woman said, they think of the plant world as consisting of hostas and companion plants for hostas. Or something like that.

Do you feel sorry for me, being in a big room full of people selling every size and shape and color of hosta (and companion plants) and only ending up with one miniature hosta?

I have no one to blame but myself. But my excuse is that I got distracted by a few other plants. 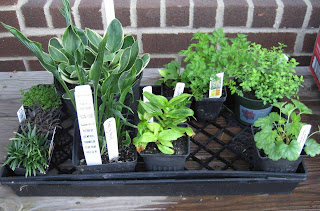 These are all the plants I purchased at the sale.

Hosta 'Praying Hands' - It has these skinny upright leaves with just the tiniest bit of a white margin on the leaves. The pot has two "eyes" so I think I can divide it into two plants.

Hosta 'Tea and Crumpets' - It was sitting next to the 'Praying Hands' and I loved the name of it and the little round spoon-like leaves with creamy yellow margins.

Tricyrtis hirta 'Lightning Strike' - A new toad lily for my new toad. This has such pretty leaves with just a hint of a swirl of green variegation in them.

Aruncus aethusifolius - Dwarf Goatsbeard. I also bought a miniature arbor to put in my miniature garden and the lovely lady selling me all these plants convinced me this would look great on one side of the arbor.

And then, I saw this trough container made of hypertufa. 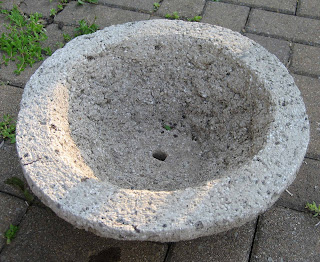 Who could resist this? I love my miniature garden, but it is mostly in the shade. With my new trough, I can have some sun loving miniature plants! My new gardening best friend, at the booth selling these, was sooooo helpful in assisting me in finding just the right plants to put in this. So I also ended up with...

Ophiopogon japonicus 'Pygmaeus' - Dwarf Mondo Grass - These almost black leaves will be a great contrast to the light color of the spirea.

And a special little garden statue.

Once I have everything planted and arranged, I'll post about the miniature garden ornaments I purchased, including the little statue, the miniature arbor, a miniature bird bath and a miniature bench. (That's a whole lot of miniature in one sentence!)

Since I only bought one miniature hosta, I'm tempted to go back, but I won't. There are too many other things going on and I don't have the time. My new gardening best friend at the booth with all the miniature plants and garden ornaments will just have to get through the rest of the week without me.
perennials

Whyite said…
ooh, I would not know what to buy in a all hosta sales. I love Hosta.

vonlafin said…
Wow, when I started reading I was a little worried, thinking that you had only bought one hosta. But after reading your whole entry, I know that you aren't sick after all. What a great list of plants!
Wed Jun 20, 11:12:00 PM 2007

Kylee Baumle said…
Carol, I was just about to say to you, "Are you CRAZY???" when you said you only bought one mini hosta. Glad you got more. That makes me feel lots better about every time I leave the nursery with an armload of stuff.

Anonymous said…
I am SO relieved to see that you brought home an armload of plants! Whew! For a minute there I felt the very fabric of the garden lover's universe unraveling. I haven't gotten into miniatures yet, but your descriptions sound so cute! I especially like the idea of a dwarf Aruncus. Interesting! (Oh yes, and thank you for visiting my blog, that was really nice of you!) ~A :-)
Thu Jun 21, 12:41:00 AM 2007

Gardenmomma Chris said…
What a fun shopping expedition! Please post a photo of your miniature garden in that trough. I know it will be great!
Thu Jun 21, 01:15:00 AM 2007

Shirley said…
Hi Carol – I too love hostas and cannot imagine ever gardening without them!

Yes, it is great to see collections of the one plant at a show and there is usually always a plant that you can find that suits your needs. I love the silver green hostas.

Robin (Bumblebee) said…
I always take a TRUCK to these types of events! Hah!

Colleen Vanderlinden said…
LOL I knew you had to be kidding. You got a really nice selection of plants, and I just love that heuchera. I think if I were going to go plant crazy, I would end up with tons of heuchera. I can't wait to see the photos.

Anonymous said…
As you will soon find out, you are in trouble with your youngest sister for not asking her to go with you. I know she feels if it's good enough for you, she has to have it too. Competition?
Thu Jun 21, 10:20:00 AM 2007

Yolanda Elizabet Heuzen said…
First I thought you were under the weather or something when I saw that pic of just 1 tiny hosta but no, you were feeling fine and buying plants left, right and center with the aid of your new garden friend. ;-)

Anonymous said…
I love your new cute little plants.
I can't wait to see your mini-garden.
I love those kind of events.
My hostas have all been eaten.
What the heck is hypertufa?
Thu Jun 21, 02:14:00 PM 2007

Carol Michel said…
All... your comments are so funny and kind. Thank you! Funny that you would be concerned that something might be wrong if I only bought one hosta! You all are the same, and just wanted validation that "no one can go and buy just one".

I will definitely post pictures of the mini garden when it has been planted.

And I talked to my youngest sister and she is no long *that* mad that I went without her. I think I promised her some hosta divisions in a few years or something like that.

Unknown said…
You did very well, Carol--I don't think I would have been so restrained in my purchases. I had twinges of plant lust looking at your new darlings, though...especially that cute little heuchera.
Fri Jun 22, 02:13:00 AM 2007

Molly said…
Oh, hosta venusta is just a wonderful little plant. It spreads out rapidly, too, unlike some mini hostas that never form a clump more than a few inches across. Check my blog entry for March 31 to see h. venusta that I purchased in a 2" pot less than three years earlier.
Fri Jun 22, 01:06:00 PM 2007

LostRoses said…
Oh, I need that trough! Wonder why I never see any here? I saved some instructions for making them about 20 years ago and haven't gotten around to it yet. Can't wait to see your miniature (fairy) garden!
Sun Jun 24, 06:13:00 PM 2007