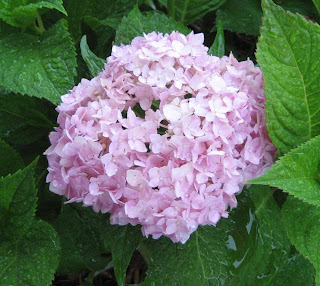 It's raining again today and it looks like it is going to rain off and on all day long. In the previous 24 hours, my rain gauge measured one inch or so of rain.

So many plants seem happier when it rains. Like the Hydrangea 'Endless Summer'. Before the rain, the flowers were droopy and limp and seemed dull.

Now they are bright and perky and soaking up the rain.

Rain Lilies (Zephyranthes sp.) actually bloom when it is rainy outside. I usually refer to these as Fairy Lilies but today, they are Rain Lilies. 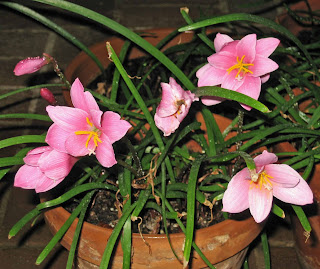 Even though they were watered every day, the lilies didn't bloom when it was so dry out. They waited until this weekend to bloom. I assume it was the rain that caused them to bloom and not Midsummer's Night?

Today, the bird bath fills itself. 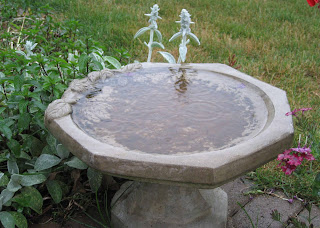 Rain is such a miracle after you've been without it for so many weeks. And even though everyone has seen rain and wet gardens before, I decided to go out in the rain with my umbrella and just see what was going on and what I could find.

Look what I found. 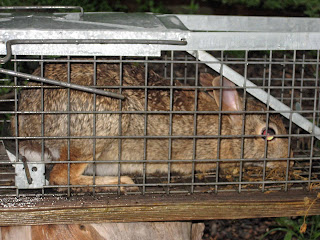 A rabbbit in my trap. I put the trap in between rows of green beans several weeks ago, where the bunny was eating constantly. I figured at some point Mr. (or Mrs.) Bunny would go down that row and end up in my trap. And I was right.

After making the rabbit pose for pictures, I picked up the trap to put it in the back of my truck and take the little bunny for a little drive. My plan was to take Mr. Bunny to a nearby park that was across a creek and a few miles from here so he couldn't find his way back.

But when I picked up the trap, the rabbit got all jumpy and wild and ended up pushing open the one end of the trap and escaping! Escaping and running off through my garden, finding shelter under a nearby snow ball bush.

I guess I forgot to flip down the wire "hoops" to further secure the trap doors, and because I was holding the umbrella with one hand, and the trap with the other, as the rabbit moved to one end, the trap flipped downward and gravity and "rabbit super-strength from eating my bean plants" was enough for the rabbit to push open the door and jump to freedom.

So there I stood in the rain, with my empty trap in one hand and an old umbrella in the other, getting wet and watching my catch of the day run off. Was that the little snickers of garden fairies I heard, laughing at my thwarted attempt to catch a rabbit?

Drats! The rabbit wins today's round but the trap has been reset. I'm not giving up yet! I hope the rabbit is telling his family, "You would not believe what I've been through! Stay out of Carol's garden, it is just too dangerous". Or I hope that I re-trap the rabbit, and next time I remember to secure the doors!