Food From The Jungle

July 30, 2007
My aunt sent me an email Saturday titled "Food from the Jungle". Their garden does indeed look like a jungle. 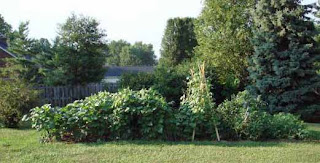 They live in zone 6, so I think they are usually two weeks ahead me on blooms and frosts. I don't know how they even got in that garden to pick anything, but they did. Look at their harvest. 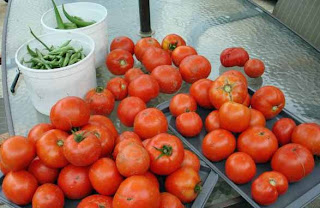 I thought my harvest on Sunday was pretty good, too. After all, I had to get an extra bowl for the beans and a second basket for the peppers. 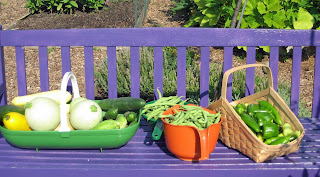 But my harvest is sadly lacking in tomatoes. There are just a few smaller tomatoes and some cherry tomatoes down under those peppers. I had previously picked six or seven tomatoes and briefly thought when I took pictures of this harvest that I should get those tomatoes to add to the picture to make it look a bit more tomatoe-y and balanced. But it would be wrong to make my harvest appear like something it's not, just to compete with my aunt's harvest. After all, gardening isn't a competitive sport, is it? And I couldn't compete with that tomato harvest, anyway.

While I was out in my garden on Sunday, I saw the rabbit again. I was sweet and nice to Mr. Rabbit because it seemed he wasn't really affecting my harvest all that much. I've already picked ten bowls of green beans, more than I've picked in the last ten years combined! As long as I get plenty from my garden for ME and don't really know what I'm missing that the rabbit is eating, I'm happy to co-exist with it in my version of a garden jungle.

Which brings me to this evening. I went to the garden to check for tomatoes and found three that were ripe and ready to pick. They look good, don't they? The one on the lower left is my favorite variety 'German Johnson'. 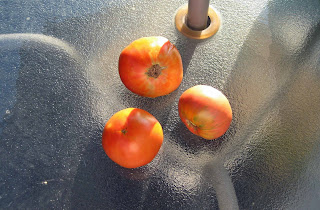 But they are not good. The rabbit had been eating two of them. 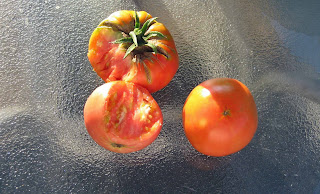 I caught him in the garden again this evening and scared him off before I realized he had been eating tomatoes. When I saw those half eaten tomatoes, I picked them with the intention of throwing them at the rabbit.

But I paused to think it through. If I threw the tomatoes, I'd probably miss and they would make a mess when they went splat on the fence. So I decided to chase the rabbit away. He ran the long way around the yard before he escaped, so I ran the long way, too. Yes, gardening is good aerobic exercise, especially when you chase after rabbits. (I just hope the neighbors weren't watching).

Then I took the two half eaten tomatoes and used them to bait my rabbit trap. If he likes tomatoes, let him eat them in the trap!

And this time when I catch him, and surely I will, he won't get away!

In the meantime, while I wait for more tomatoes to ripen and for the rabbit to enter the trap, I'm going to see if my aunt will send me all their secrets of growing tomatoes, all of them. Varieties, fertilizer, watering, caging versus staking, starting from seed, all their secrets. It's my heritage! I want to know!
family rabbits vegetable garden

vonlafin said…
I am having the same problem with my tomatoes, the plants are 5 foot tall, and beautiful, but the fruit is not ripening. Tomorrow, I plan to cut a bunch of the foliage back an see if that helps. Good luck with the rabbit, I would have loved seeing you chase him around the yard!
Mon Jul 30, 10:28:00 PM 2007

LostRoses said…
Your post reminds me that I really ought to water that tomato plant of mine.

Anonymous said…
Since your aunt grew up on a farm, in farming country, she might have an edge on you. But I have to admit you have the farming genes in you and do great for a city girl
Tue Jul 31, 07:16:00 AM 2007

Colleen Vanderlinden said…
LOL you have your rabbits, and I have my squirrels. I find that it's better not to think about the fact that the neighbors might catch a glimpse of me chasing a rodent through my yard....
Tue Jul 31, 07:40:00 AM 2007

..Jefferson wrote that he let his neighbor harvest his peas first, year after year, just so he could boast that he got the first peas of the season.
Tue Jul 31, 09:33:00 AM 2007

Anonymous said…
I enjoy your blog...I read your prior entry on the rabbit's escape. The cruelest thing you can do to an animal is move it to a park or somewhere else miles away from it's home...animals are very territorial, and will fight for their territory. In addition, rabbits need familar places and a place to hide. They are preyed on by many other critters. Not to sound too preachy, but sometimes it can be cruel to be kind...either put up with the rabbit, build a better fence, or use a lethal trap.
Tue Jul 31, 01:59:00 PM 2007

Robin (Bumblebee) said…
I'm sorry about missing out on the book club this time around. Between too much work/work and reading Harry Potter, there is just no time left.

Looking forward to the next one though. I am full of opinions!

Carol Michel said…
Earth Girl... I'm trying to think if I waved my arms and yelled. I konw I didn't yell, can't say for sure about waving my arms...

Vonlafin... I have a feeling in a few days, the tomatoes the rabbits can't reach will start ripening and be all mine!

Lost Roses... thanks for the kind words and I'm always happy to remind you, any time.

Kathy... I thought of slugs, but there is way too much eaten on these tomatoes to be slugs.

Eleanor... My aunt may have an edge on me, but she can teach me!

Colleen... Yes, I agree, it is best not to think about what the neighbors think.

Cyndy... Yes, that's what I'm doing... holding back on my tomato harvest so others can be in the limelight, then when they are all done, I'll come forward with the ultimate tomato! Yes, that's it, and I'm NOT competitive!

Anonymous... interesting points, I'm thinking it through, but my track record on trapping is so poor that I think it will be awhile before I actual trap a rabbit again.

Eleanor... I need to learn to control my wildlife!

Sue Swift... Wire netting is so ugly and I like my vegetable garden to be pretty as well as fruitful.

Robin(Bumblebee)... What? Reading Harry Potter before Charles Dudley Warner? But you've had two months! Just kidding, we'd love to have you join in on the book club whenever you can.

Thanks all for the comments!

Anonymous said…
I like what anonymous had to say. Maybe you should just put out a bunch of carrots or rotten veggies out on your patio and feed the rabbit? If you keep him well-fed on what you choose to feed him, he'll leave the rest alone. Cheer up - I don't think wild rabbits have a terribly long life span - LOL!
Wed Aug 01, 04:39:00 AM 2007