A Good Problem To Have 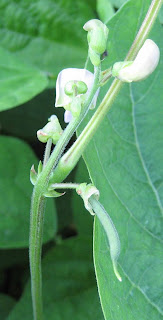 We know that there are going to be problems each year in the garden. Bugs, weeds, plant diseases, too much rain, too little rain, late frost, early frost, rabbits, deer, the list could go on and on.

Shhh... don't say too much about them.

As a matter of general policy, I tend not to discuss any of these problems in any detail or to a great extent with those who don't garden. They don't seem to understand what compels a gardener to keep trying year after year in spite of these potential and real problems.

But I do talk a lot about the good problems we have as gardeners, like having too much produce (TMP).

As I look around the garden this evening, I believe I am going to have a bigger problem than normal this year with TMP.

Little green beans are forming, and for whatever reason, the rabbits are staying away. It could be because of the neighbor's cat, who was roaming around in the yard this evening, or it could be that I scared away the rabbit who got caught in my trap and he was the only one out there.

I also have baby cucumbers, little peppers, lots of green tomatoes, onions, corn that is tasseling, and look... 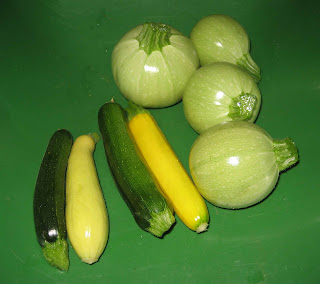 This is this evening's harvest. To give you some perspective, those "traditional" zucchini are about the size of a hot dog. From the left the varieties are "Ambassador", "Gold Bar", "Ambassador" again, and "Gold Rush". And yes, those are four more "Cue Balls" to go with the three I harvested yesterday.

I knew I had to take some action this evening because at this rate, I’m losing ground and “they” (the zucchini) are taking over. There are at least six more "Cue Balls" nearly ready to harvest. I did wonder, standing out in the garden, why I planted so much zucchini, but I can’t do anything about it now. It’s time to eat them, give them away, force others to take them or learn how to fry the blossoms.

So I decided to make something to eat with them. I read through all the comments and suggestions from yesterday’s post, (which were very helpful thank you!) and decided I should make a pie. I found a recipe online for a crustless zucchini pie that sounded easy to make, and it was. This used up the three “Cue Balls” I harvested yesterday, but I’ll admit that I threw out the seedy parts and just used the outside “meat” of the zucchini. Plus I cut the recipe in half and only made one pie.

I sliced up the other varieties of zucchini and let them marinate in some balsamic vinaigrette and ate them as the salad. Can you eat too much zucchini in one meal? Don't answer yes, because my zucchini dinner is already eaten!

Most of the zucchini beds are hidden in this picture of the garden, or way down there at the other end, but they are out there, eight hills worth, growing and producing as fast I can pick them. 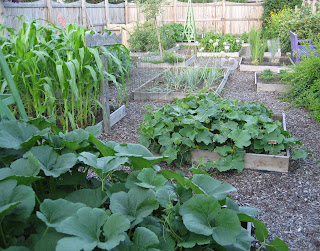 .
To prove to my family that I do know where my oven is and how to turn it on, here's the pie I made. 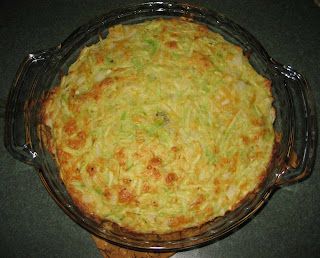 It was pretty good, almost like a quiche, with a mild enough flavor that you could also make it and serve it for breakfast. In fact, I might make another one for breakfast on the 4th of July and eat out on the patio, with a vase of fresh flowers from the garden sitting on my table.

The freshest flowers will be the zinnias which have just started to bloom. 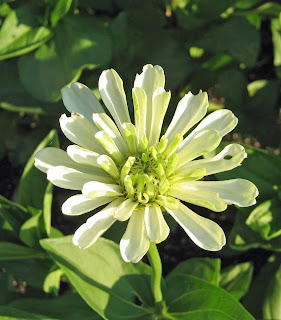 I'm glad the zinnias are starting to bloom because looking out at the rest of the yard, I don't see a lot of other flowers blooming and I was mildly concerned that I wouldn't have much to show for the next Garden Bloggers' Bloom Day on July 15th.

Or I'd just have zucchini blossoms to post about.

(Special thanks to Robin(bumblebee) for the idea to make a pie and to Annie in Austin for admonishing me to pick the zucchini while they were still quite small and use them in salads. Most years, my zucchini get to nearly club size before I pick them and give them away. The difference this year? I think it is these varieties seem to lend themselves to earlier picking. I got them from Pinetree Garden Seeds. Last year, I planted Burpee's Hybrid and Burpee's Golden Hybrid. A few years ago, I did plant "Gold Rush" and I think it was a smaller squash. I've also planted the variety "Black Beauty", which definitely is a big club of a zucchini, if you let it be. The lesson here... look around for other varieties and give them a try. Don't get stuck in a rut with the same old varieties... unless that variety is "Cue Ball" which I will be planting for years to come!)
vegetable garden