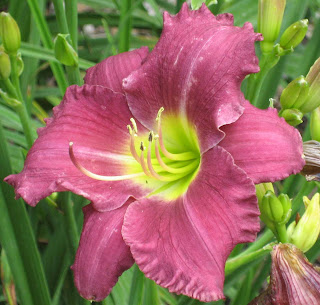 I'm still recovering. It was all kind of confusing and a bit overwhelming to go to the local daylily farm, Soules Garden and see all the daylilies in bloom. My youngest sister went, too, and was only able to speak in short sentences. "I like this one." "Check out that one". "Oh, I want to get that one".

After awhile, it was hard to keep track of which ones were which ones. We were both more attracted to the purply-pink mauve colored dayliles than to the orange and yellow ones.

I could not even begin to tell you the name of the daylily to the right above. It was one of hundreds in bloom today, just one of many that my sister said she liked.

Here's one of the fields of daylilies in bloom. See what I mean? It sure can get confusing fast if you aren't sure of what you are looking for. 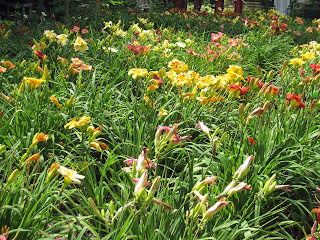 Many may find it unbelievable, but we didn't buy any daylilies today. But do not be alarmed! We have a plan, of sorts.

My advice to myself and to my sister was that we should not buy bare-rooted, freshly dug daylilies unless we had flower beds at home already prepared and ready for planting. Plus, since neither one of us is likely to end up with dozens and dozens of varieties of daylilies, we should be more selective and take our time to browse through their catalog which, although it doesn't have pictures, has good descriptions and more importantly, the prices.

Out in the fields you can look all day and see dozens of daylilies that you want, but then you have to look at the catalog for prices and description and you might find you've fallen in love with either a very expensive daylily or a daylily that they aren't selling yet. I told her it would be better to look at the catalog and pick out early, mid, and late season blooming daylilies, in a price range that your budget can handle, then submit an order.

Plus, by waiting, my sister could also get a new flower bed dug up before she had a pile of bare-rooted daylilies begging to be planted.

And here's another idea. We can make sure to each get different varieties so that in a few years we can share divisions with each other. Yes, that's what we'll do and I bet we can get my older sister to go in on that deal!

Listen to me being all sensible and level-headed while I was surrounded by hundreds of different dayliles in bloom. And in the same place where I went last year and lost my head, so to speak, over miniature gardens, just by seeing a miniature garden they have. 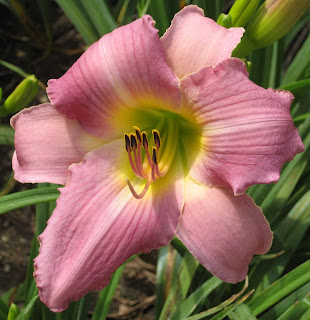 Oh, did I mention they also have hostas? Lots and lots of hostas! My brother-in-law who loves hostas, "the bigger the better", went along, too. His comment, "you've brought me to heaven on earth". 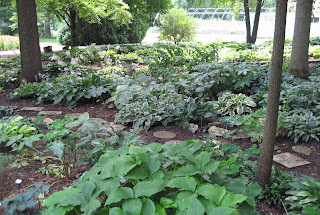 He ended up buying two new hostas because he had a newly dug up bed for hostas, ready to plant. I guess it will be up to my sister to ask him why he spent time digging up his new hosta bed and not a daylily bed for her.

And me? Well, I didn't leave empty handed. I bought another new hosta, Hosta 'Tortifrons', for my miniature garden, because it will get up to seven inches tall, and I needed it to add some height to the little garden. And I decided to go back again on Sunday, after I've had a chance to study their catalog, to see some of my daylily selections blooming. Then I'll figure out where I can plant them in my garden and place an order to be picked up later next week.

I really am being quite practical about these daylilies!

Robin (Bumblebee) said…
I am amazed at your self control. I don't have any at all when it comes to impulse buying for the garden!

Robin (Bumblebee) said…
Shoot. I never can remember everything I want to say the first time! Sorry!

I meant to tell you that I posted that zucchini pie recipe. I know you don't like a lot of ingredients, but this one is really worth it!

Jane O' said…
I have purchased bare root daylilies and left them for a week before planting. Just put them in a bucket of water until you're ready. You really can't kill the little darlings.
Thu Jul 05, 06:10:00 PM 2007

Anonymous said…
I have been in that position and totally overwhelmed with the choices but...I usually leave with a plant or three. Practicality ruled the day! We will all be watching to see what your final choices will be!
Thu Jul 05, 06:51:00 PM 2007

Earth Girl said…
A local daylily hybridizer offered us free plants for the historic garden. You reminded me to visit but now I'm concerned I will be overwhelmed!
Thu Jul 05, 08:50:00 PM 2007

Unknown said…
I would have never made it through empty handed. I went to the Rose Emporium outside of Austin and came home with 7 rose bushes. And I was 8 months pregnant! Luckily it was Nov and mild so I could let them hang out until I had the bed ready to go in Dec.
Thu Jul 05, 09:51:00 PM 2007

Unknown said…
Ummmmm...you have an impressive will of steel, that's for sure. I can resist anything but temptation in the form of a garden centre or nursery. Daylilies are one of my downfalls, too, and we have a real good little nursery nearby, Canning Daylily Gardens. Which reminds me, I must go pick up the seventeen or so new ones i've ordered....tee hee.
Daylilies ARE really tough--I have a clump sitting out of the soil out back, (it weighs about fifty pounds, I think) waiting for me to cut it all apart and pull out the couchgrass. It's been sitting there for several weeks and it's just fine. Hostas are tough that way too--I divided one of mine last week becuase it was crowding out something else.
Thu Jul 05, 10:47:00 PM 2007

LostRoses said…
You have way too much self-control, woman! But now you're in trouble with the older sister. I'm sure you will make sensible, well-thought out choices and I expect you to do something very random to make up for it!
Thu Jul 05, 11:12:00 PM 2007

Kylee Baumle said…
I know a daylily hybridizer quite well and have visited her gardens as well as another local hybridizer's gardens (strangely enough, both are named Wolff/Wolfe!). I was not as controlled as you were when I left those gardens!
Thu Jul 05, 11:36:00 PM 2007

Anonymous said…
Kathy (the older sister)from the youngest sister.....
YES! You MUST go. It's even better than the one by your house, but remember, it's all daylillies and hostas. They have amazingly cute ornaments and garden goodies everywhere as well. Too bad they don't sell those too! LOL!

Carol was too controlled. If it hadn't been for the fact that we accidently locked Grandma out of the house, I might have had to overrule the middle sister and splurge anyway! As it was, we were in a hurry to get home, so it was easy to go along with "the plan." I had NO idea that there were enough varieties of hostas and daylillies to cover 5 acres. It really was overwhelming! Another gardening paradise that Carol has kept her little secret far too long! I'm so glad I pressured her into revealing her source!
Fri Jul 06, 05:06:00 AM 2007

I can't believe you had such resistance to temptation ! Those daylilies are just beautiful. I'm a big fan and I've seen some pretty exciting new ones lately. But I've got to be strong like you and resist the temptation because I have so little space.

Colleen Vanderlinden said…
LOL...while everyone else is admiring your will of steel, I'm admiring your very cunning plan for ending up with even more varieties in a few years by planning all of this out! You are one smart lady :-)

Annie in Austin said…
It really does work to choose dayllies carefully, grow them well and get them pumped, and then swap divisions - stay level-headed Carol!

Whyite said…
There would be no way I would of left there without something in hand.

growingagardenindavis said…
I'm proud of you for being strong...it's so hard to resist plant temptation. But your plan is smart and you'll have the daylilies to prove it soon! The day I told myself NO PLANTS and came home with only two little succulents and a six pack of portulaca I thought I had done well...
Fri Jul 06, 11:10:00 PM 2007

Anonymous said…
I am so impressed with your being all steadfast and methodical. But I think it's smart. I have bought things in that type of situation and I inevitably wish I had made a different choice after I learn more. A :-)
Sat Jul 07, 02:55:00 AM 2007

lisa said…
I'm awestruck by your willpower! I agree with the others-daylilies ARE hard to kill! I've had good luck potting up the bareroot stuff until I'm ready for it (since I have zero discipline with regard to plants!)
Mon Jul 09, 04:51:00 PM 2007