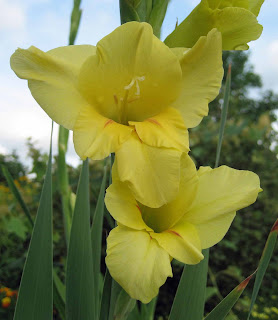 Patience in the garden is one thing, persistence is quite another.

Last summer, I lamented that I could not get a decent harvest of green beans. I think I picked one bowlful before the pathetic little bunny eaten bean plants died off. And it didn't help that the beans were also attacked by Mexican bean beetles, which pretty much finished them off. Prior years were even worse for my beans.

But I persisted, I did not give up. I adjusted. I tried new methods to keep the rabbits away.

And I have been rewarded. 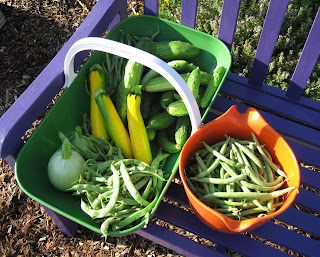 That brings my total bean pickings to four messes. (What do you call a bowlful of beans? I call them a "mess of beans".)

Last year wasn't all that great a year for cucumbers, either. But I planted them again this spring and tonight I picked two dozen cucumbers from my little four feet by four feet patch of cucumber plants.

You just can't give up when you're gardening. There is always next year, another way, a different variety to try. The slate gets wiped clean each spring, why not try again?

Which brings me to the night blooming cereus. 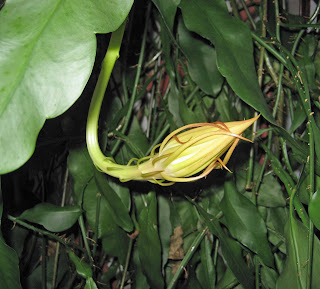 It's still a bud, still not blooming.

I could have tossed this plant out years ago. It's not all that attractive as a house plant (some would say that's an understatement); it's big and awkward with stems going every which way.

It bloomed last year, but prior to that it last bloomed in 2001 and also in 2000. And I think it bloomed in 1986, but I don't have records that far back, so I'm not sure. I've learned that the secret to getting these to bloom, as house plants, is to let them get pot bound, don't fertilize them, and don't give them all kinds of water.

I think the reason it didn't bloom from 2001 to 2006 was because I repotted it to a larger pot in 2001, so it was no longer so pot bound. I had to repot it because the container it was in was too small and the plant was top heavy and kept falling over.

So I put it in a really big container and added an arbor to support it. It no longer toppled over, but it was content to just exist and grow for five more years before it bloomed again last year.

The fact that it is going to bloom again this year gives me hope that it will bloom annually from this point forward. But it has looked like a bud about ready to bloom for the last four days. I'm losing my patience with it, and want it to bloom NOW!

The bloom is my reward not only for patience, but for persistence in figuring out the care that this plant needs to encourage it to bloom.

How have you been rewarded for persistence in gardening?

Annie in Austin said…
You have achieved bean-i-tude! Yay, Carol! The vegetable basket is a work of art, with beautiful shapes and colors.

You could tell Carolyn you're 'fixin' to cook a mess of beans' and get her all nostalgic.

I've been waiting to get a fig from the tree I planted here a while back. Two figs developed and ripened, and I just ate one. It's a small crop but wait until next year.

OldRoses said…
My gardening philosophy has always been that the best thing about a garden is that there's always next year! Patience and gardening seem to go hand in hand.

Thank goodness for virtual meetings! I can pretend that my GBBD post which I just published was done on July 15. And I won't have missed the meeting and no one will have missed my post.
Wed Jul 18, 02:33:00 AM 2007

Melissa said…
I think you are onto the secret. I know that I am becoming more and more involved in the from seed process not only because it is cheaper and better in many respects but also because it teaches me so much about patience and God's timing and miracles and that sometimes it is out of our hands and we must wait.
Wed Jul 18, 05:49:00 PM 2007

Carol Michel said…
Carolyn Gail... I fixed them with some onion from the garden, but do like some with bacon, too. Just didn't have any on hand... next time...

Annie... Congratulations on your fig! Even a small harvest can sometimes be a big triumph, can't it.

Old Roses... Yep, I often find myself saying, 'wait until next year'. I'll stop by and check out your post and pretend it is Sunday again!

Me... Yes, growing a vegetable garden from seed is the way to go. It is amazing how quickly the plants grow.

Thanks all for your comments!

Unknown said…
Beans....here in Nova Scotia we fixate on something called hodgepodge. It is comprised of fresh green beans, yellow beans, small young peas, tender carrots,, and tiny new potatoes; all cooked together (not all at once--start with carrots and potatoes, add beans, and then peas for a couple of minutes. Timing is all.) Drain, add butter--yes butter, no slimy margarine allowed--and cream. (Blend is acceptable.) Serve in bowls with homemade bread and listen to the sighs of contentment.
I can hardly wait! The beans are coming on now.
Wed Jul 18, 10:13:00 PM 2007

Cynthia said…
This is only my first year with flower beds so I'm not sure I have had much experience in the way of persistence in gardening! I was pretty persistent in figuring out the drip system issues though if that counts.
Fri Jul 20, 08:06:00 PM 2007