What Goes Around, Comes Around 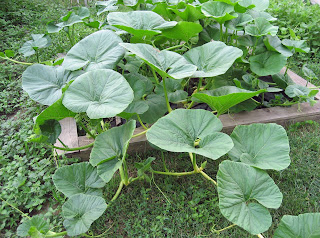 Earlier this spring, I was at Lowes with my youngest sister and my nephew and I saw a packet of seeds for Atlantic Giant pumpkins. I've always wanted to try to grow a ginormous pumpkin, but I just don't have that kind of space in my garden. Those vines can grow everywhere and won't be contained to one raised bed.

So, I grabbed the packet of five seeds and said to my sister, "Will you grow these in your garden?" "Hey", I said to my nephew-who-is-five, "how would you like to grow a pumpkin that is as big as you are?"

My sister responded, "Sure!" My nephew thought it would be fun and laughed at the idea of it.

I felt a little evil about it, knowing how big the vine would get, but brushed those thoughts aside.

How exciting this would be! My sister would have the sprawling pumpkin vines all over and I would get to occasionally visit "my" pumpkins and see how big they were getting. I realized that we wouldn't grow any record breaking sized pumpkins, but we should get some big ones. And I keep saying "we" because after all, I bought the seeds!

Yes, I was all smug about how she would have the big pumpkin vine to contend with and I would have my nice neat vegetable garden with the freshly mulched paths, everything weeded, all the plants more or less staying in their own raised beds. I like some vegetation to spill out along the sides of the beds, but not so much that they block a path through the garden. That picture above is of the pumpkin vines about 3 weeks ago in my sister's garden, freely growing wherever they wanted to grow, heading out toward her lawn.

Did I mention I planted a two hills of spaghetti squash in my own garden? 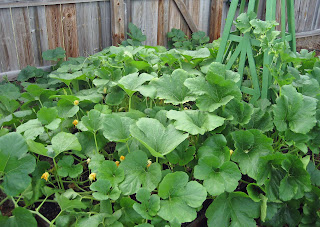 When I ordered the seeds for spaghetti squash last winter, I was only thinking that I love spaghetti squash and decided I should grow some. I gave no thought to what size vine it would be. I knew it would be a bigger vine, but I thought I could keep it in one raised bed.

Now I go out to my garden and I think about my sister's pumpkins and realize that what goes around, comes around.

Next year I might just give in and grow my own pumpkins.