Good Intentions and Some Garden Advice

August 13, 2007
I have a theory about what happens to good intentions.

You know how when you are driving home from work, and you make that mental list of everything you are going to do when you get home? Then you get home and you think, "I'll just sit down for a minute on the couch to relax." Then the next thing you know, you are zapped and do nothing. What happened to those good intentions?

They get sucked off of you and are now under the cushions of the couch. You think I'm kidding? Look under those cushions and see what's there! (Who looked just now or even thought about looking?)

Tonight, I didn't let my good intentions get sucked under the couch cushions, and so I have some things to show you from the time I spent in the garden, along with some advice, starting with don't go near the couch when you get home.

Look at these spirea. 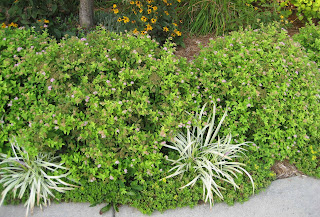 Earlier this spring, I cut these spirea down to the ground. I was hoping to have time to move them, too, because the design of this bed is all off. I just rowed them up along the sidewalk. Boring! But now they look so nice, I think I'll leave them and tend to other areas of the garden that are far worse.

My advice... some shrubs like these spirea are rejuvenated when cut back like I cut these back, so don't be afraid to do just that. But don't just row them up along the walk the way I did these. 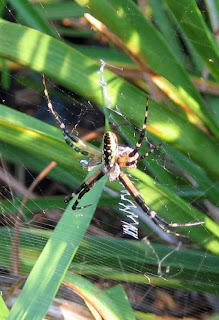 As a general rule, I don't much care for spiders. There was a time, decades ago, when I would knock a spider like this to the ground and squish it. But now, I am more enlightened about spiders, and I let them be, as long as they let me be. "Let me be" means no sudden moves toward me, don't touch me, and don't come in the house!

My advice... leave spiders alone and they will leave you alone.

I did not spend much time in the vegetable garden this weekend because it was hot and dry. Last night it was so dry that all I did was set up the sprinkler and let it water the garden.

This evening I harvested the biggest zucchini I've ever harvested, there on the left of all the squash. I had convinced myself late last week that I probably wasn't going to get much more squash, as I had picked all I could find and didn't see a bunch of new blossoms. So where does giant squash like this come from?

Is giant zucchini like this a sign of lazy gardener who doesn't check frequently enough for produce in the garden?

My advice... embrace your giant squash and act like you meant to grow it that big. 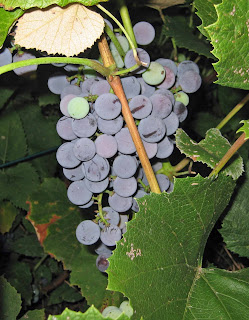 I've been warning people that I am going to have a lot of grapes this year. I planted this grape vine several years ago, just imagining how wonderful it would be to harvest my own Concord grapes.

Now that the harvest is near, I realize that I'm not quite sure what to do with these grapes as I don't know how to make preserves. I supposed I could follow a recipe, but wouldn't it be better to give these grapes to someone who knows what they are doing, and in return, they could give me back some of the jam or jelly or whatever they make with them?

My advice... before you plant any fruit bearing crops, have a plan for what to do with the fruit!
gardening