The Little Begonia That Could 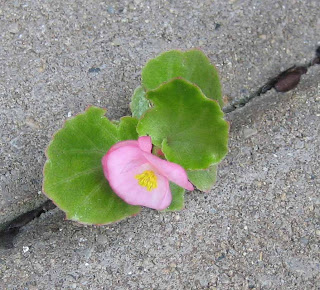 Here's the little begonia that could... that could germinate from a seed that landed in a crack between two bricks in my patio and then bloom.

I haven't had begonias planted anywhere near this spot for two years, so this seed probably lay dormant through two winters, at least, before germinating.

This coleus is following suit in another spot in the patio. It's probably from the seed of a coleus I grew in a container near that spot last year. 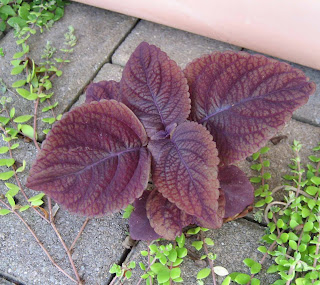 I think I'll gently pull this coleus out and pot it up. Coleus is in the mint family, a family of plants known for vigorous growth, so I think it will make it. It will want to grow!

That's right, plants want to grow! No matter how much you've studied about how plants grow or observed plants growing in your own garden, you have to be impressed by their ability to grow under less than ideal conditions.

And as gardeners, sometimes we provide less than ideal conditions, don't we? But we remain optimistic that the plants will grow and hopefully thrive in our gardens. Otherwise, why would we keep gardening season after season, even after a summer like this one with less the ideal conditions?

You should never give up hope when it comes to your plants and their ability to survive.

Would you like more proof on why we should remain hopeful?

These are some caladiums that finally sprouted nearly ten weeks after I planted the tubers. 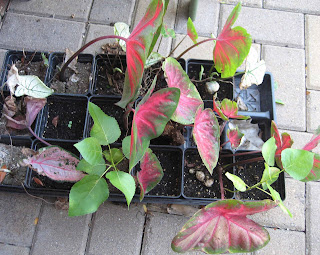 I had planted out all the other caladiums that did sprout earlier in the spring and then left this tray full of what I thought were tubers that were too dried up to grow and weren't going to sprout even with good soil and regular watering. But for some reason, I kept watering them anyway, and they finally sprouted.

And those two green 'non-caladium' plants? Those are cottonwood tree seedlings. It is a long way from my garden to any cottonwood trees, so those seeds traveled a long way in the wind and air currents to land in these containers, full of fresh dirt to germinate in. What are the odds?

And these containers? These aren't a good example of remaining hopeful that a plant that looks dead might actually survive. These are were my delphinium seedlings and some late germinating violas. 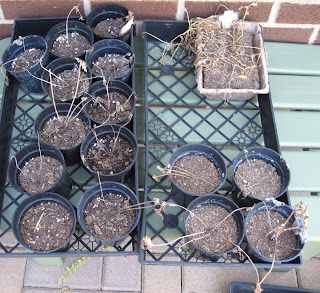 Even I might concede that these seedlings are possibly dead.

Yet, I still watered them again this evening, just in case or perhaps out of habit, I'm not sure. I guess I'm having a hard time letting go and giving up on my delphinium dreams.

Do you have a plant that you keep watering, that you should probably give up on? Maybe we could form a support group and help each other out. "My name is Carol and its been three hours since I watered these dried up seedlings..."