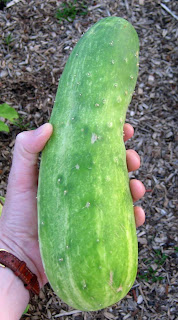 I did some research on the water content of vegetables. Did you know that this vegetable is 96% water?

Do you know what it is?

No, unfortunately, it is not a zucchini squash. It's a cucumber and I let it get far too big to be edible so it went straight to the compost bin.

How many different varieties of tomoatoes are there on this Tray O' Tomatoes? 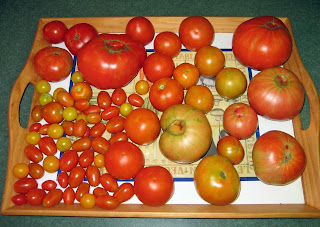 There are at least eight varieties here. I've got everything from yellow and red cherry tomatoes to Beefsteak tomatoes, plus some delicious yellow tomatoes and some early tomatoes and my beloved German Johnson. One particular yellow tomato, Orange Oxheart, is so meaty that it almost looks like cantalope instead of tomatoes when I cut it into chunks to eat.

You know it is okay to cut tomatoes into chunks instead of slices, don't you, especially if you are eating them as a side dish and not on a sandwich.

As you can see, I like to pick my tomatoes a day or so before they are fully ripe, and let them finish ripening indoors. This seems to keep them from cracking in the heat. Like everyone else, we have no shortage of heat these days.

I'm now eating tomatoes for breakfast, taking cherry tomatoes to work in my lunch, and eating more tomatoes at night. I think it is time to either make some salsa or give away some of these tomatoes.

I think I'll make salsa, which will solve my problem of what to do with all the peppers that are begging to be picked.

Which brings me to the secret of harvesting vegetables from the garden when it is so dry outside.

In any year, the secret to growing and harvesting vegetables, which are mostly water, is to water consistently and regularly throughout the season. For my garden, I set up an oscilatting sprinkler in the middle of the garden and let it run for about 90 minutes or so, once a week. This year, I believe this consistent water supply has provided me with as good a harvest as I've had in years, in spite of the lack of rain.

Did it break the bank when the water bill came? So far, no, it hasn't cost that much extra to water the vegetable garden once a week. I'm estimating it will cost me the equivalent of one extra water bill this year. "Prices may vary" depending on where you are, but that's what it will cost me.

I think it is worth it.

And, now I'm going to go look through the tomatoes to see if there is one worthy of a harvest ritual.
vegetable gardening