Who Has the Sweetest Sweet Corn? 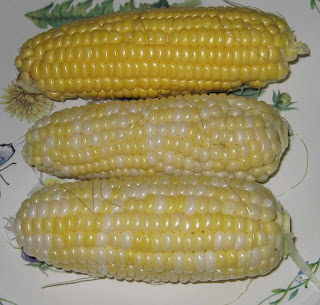 Who has the sweetest sweet corn? Me or my sister? This post was going to be about how my corn just wasn't producing good ears and I had to accept a hand out from my sister so I could taste good sweet corn at least once this summer.

I was over at my sister's house and garden late this afternoon in time to watch her carry in a big armload of sweet corn from their garden, ears and ears of freshly picked sweet corn. I acted kind of pathetic and nice at the same time and she offered that I could pick an ear to take home for my own supper.

So I picked an ear of corn from her corn patch. It's the one at the top in the picture.

Then when I got home, I decided to check my own corn, just in case.

And guess what? I have sweet corn, too! The bottom two ears are from my own garden. The ears aren't that long but who cares, it's my own sweet corn! And there is more out there to pick later!

So who has the sweetest sweet corn?

I do, because mine was picked and cooked within a matter of minutes. The corn I got from my sister had to ride in my car, then sit in the car for a few minutes while I ran into the grocery store, then rest on the kitchen counter while I went out to my garden. My goodness, it had to have been at least 45 minutes "old" before I cooked it. Whereas the corn I picked from my own garden got cooked right away, so there was no chance of any of that sweet goodness turning to starch.

But I still owe my sister a 'thanks for the sweet corn', even though it turned out I didn't really need it. After all, I might need an ear or two next year and so if I don't properly thank her she might not be so willing to share again. So I'll post this picture of her garden because it looks pretty good and she'll like seeing her garden posted for everyone to see and admire. 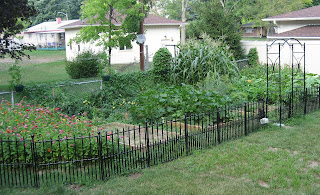 Not only did my sister and brother-in-law put in raised beds this year, they also added that nice fence around the garden to keep out kids and dogs. It's the kind of fence you buy in sections and then just push the ends into the ground. 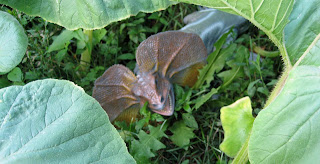 I was a bit scared when I first saw it. It's guarding the pumpkin patch where my pumpkins are being grown for me.

Thanks for the sweet corn, Sister with the Homestead! Ummm, I'll be back later for 'my pumpkin'.
family vegetable garden