Yellow Finch Farm: How to Name a Garden 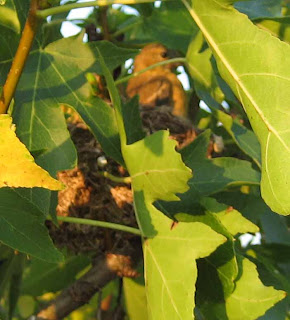 How do you go about naming your garden?

The idea of naming your garden seems quite popular with many gardeners, but deciding what that name should be isn't that easy.

Based on the comments on the recent post about naming your garden, some gardeners believe it may take them years to come up with a name for their garden. Others would like to name their gardens sooner, but aren't sure how to pick a name that isn't uppity or cutesy.

So now that this idea of naming a garden is out in the open, here are some thoughts and ideas on how you might name your garden.

Look around and see what kind of wildlife you have in your garden. In the summertime, I see a lot of yellow finches, like this one that I photographed in its nest high up in a tree. (I had to get the ladder out to get close enough to take the picture. I don't know what the neighbors thought about me standing on a ladder reaching out as far as I could to take this picture without disturbing the birds, but I didn't want to disturb the birds!)

Based on the presence of lots of yellow finches, I could have named my garden Yellow Finch Farm, although farm might imply way more land than I have in my suburban lot.

Or, I might incorporate "rabbit" into a garden name, since I seem to have a lot of rabbits running around, as in Rabbit Run Garden. Or I could make the name even fancier by making "rabbit run" one word.... RabbitRun... and leaving off the word "garden".

Consider what kinds of plants you have growing around the garden. My mom and sister have a large scarlet oak tree in their front yard, so I suggested they call their garden Scarlet Oak Gardens. One of the focal points in my own front yard is a "Guinevere" crabapple tree, so I could have called my garden Guinevere Gardens.

Is there a natural feature of your garden that is unique, like a big rock? I've got a big rock in my garden, so I could have chosen a name like Sitting Rock Garden, because the rock is big enough to sit and rest on.

Dig into garden literature or any good writing and see what other gardens have been called and pick one of those names. (Hmmm, I'm drawing a blank on the name of a garden from literature, any ideas?) Or make up a word, like Garhoe (short for gardening hoe) and then you could call it Garhoe Gardens.

One more piece of advice on naming your garden... make it your own name, one that YOU like, one that you love! Don't worry about what anyone else thinks about the name, make the name for you.

Don't get worried if a name doesn't come to you right away or the names you think of don't seem quite right. It may indeed take a while to come up with a name for your garden. Just go out into your garden and tend it, observe it, and enjoy it. A name will come to you eventually.

That's what happened to me. May Dreams Gardens just popped into my head one day, while I was in the garden in the month of May one year, and I knew it was right for my garden. And I didn't think of it the first year or even the second year of tending this garden. I think it came to me around year four or five.

You, too, will know when you've found the right name for your own garden. When you do, blog about it and tell us all.
gardens