Cutting Back and Taking Back

September 04, 2007
After ten years of tending my gardens at my current house, I'm taking back some beds that have gotten a bit out of control or just didn't turn out how I thought they would.

Here's the non-blooming forsythia that I've posted about before. 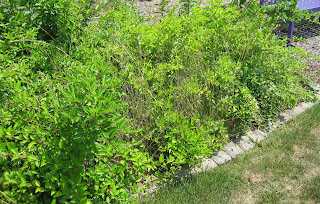 And here's that bed after I worked on it yesterday morning. I cut all the forsythia down to the ground and bagged up the cuttings to save for another day of happy chipping and shredding. 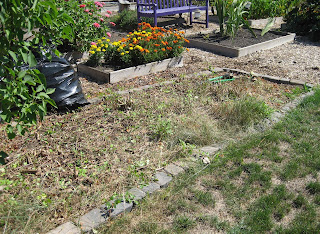 (Yes, the grass looks terrible after a very dry summer).

Then, I went around to the side of my house, by the garage, and started in on this bed of ivy and shrub stumps. 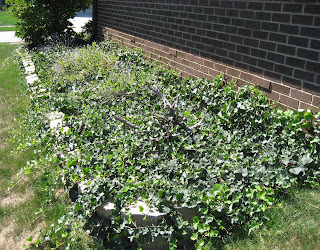 The stumps are from two Hypericum shrubs that succumbed to a nasty attack of bagworms last summer. There are also three half-dead Deutzia shrubs buried under all that English ivy (Hedera helix).

Here's that bed after I dug out the stumps and cut back the ivy and Deutzia. 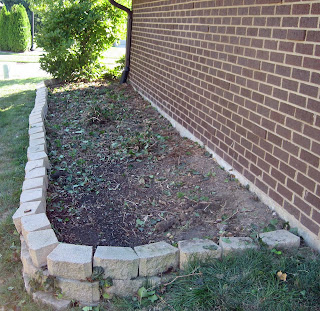 I know you are looking at that retaining wall and wondering why I bought the pre-cast concrete blocks to build that. I don't like those blocks, either, but at the time, it was what I could afford and there is a pretty good slope along that side of the house, so I needed something to make that bed. Now it's all askew and leaning and needs to be redone.

All the ivy, by the way, is being tossed with the trash tomorrow, all six bags of it. I don't want to try to compost it 'whole', and I think it would clog up the shredder because of the waxy coating on the leaves. (At this point my youngest sister is getting ready to click on the comment button and tell me she wants all that ivy to plant at her house. She has a lot of shade and would love a lush bed of ivy. I'll have to tell her again that she has deep shade and even the ivy isn't going to grow that well in all that shade. She should know that by now because she hasn't had much success with any of the ivy she has tried to grow there.)

I worked on those beds all day yesterday, with frequent breaks because it was hot like summer out there. (Labor day is the end of "people summer" but it is still summer, don't forget.)

I've cut these plants back, but I haven't taken the beds back yet. There is still some work to do.

The forsythia send suckers up all around them and the ivy spreads roots wherever it seems to touch the ground, so both beds are filled with roots, roots that will try to resprout just as soon as I turn my back. I need to get those roots out of those beds, as much as I can. Then I will have taken back those beds.

How to get rid of those roots? I think the best option is to dig them out and replace the dirt. Any other ideas?

And if that is the best option, and I think it is, then that is a lot of work, A LOT OF WORK. And that work would take a lot of time for me to do, time I'd rather spend planting something.

So I've called a landscaper to come and give me a quote for removing the dirt and roots in the "former ivy bed", straightening out the retaining wall (perhaps replacing it with real stones), and adding back good top soil. Ditto the fosythia bed, but without the retaining wall. And while they are here, I might as well have them dig the big bed I've wanted to dig up next to my fence in the back yard and cover it with mulch for me to plant later.

Are you now thinking what I'm thinking? Duh! If I have a landscaper do all that, then why did I spend time (all day) cutting those forsythia and ivy back like that? They could have done it as part of the job! I'll answer that another day...