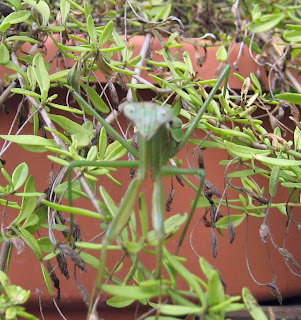 I think the days of this praying mantis are numbered. Eventually, it is going to get cold and we will have a frosty morning, but for now, summer weather continues.

When will we have frost around here in central Indiana? I don't know about the official records, but based on the last six years that I've been keeping my own garden records, if you guessed any time from October 2 through November 1, you could be right.

See, when you keep a garden journal, you don't have to remember, you can just look it up!

I don't have to look up this particular weed, a late summer annual weed that makes an appearance between the bricks of my patio every year. 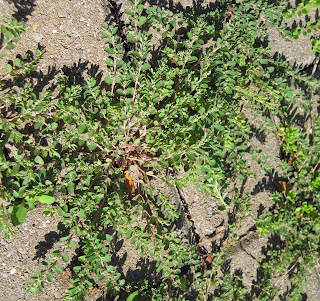 We are old friends, this weed and I. This is prostrate spurge, one of the Euphorbias. It grows up in the cracks between the bricks and also makes an appearance in nearby flower beds and wherever there is a bare, sunny spot in the lawn.

Luckily, it is easy to pull up and pull it up I did. Like most Euphorbias, it has a milky-white sap and as you weed it out, that sap gets on your fingers and makes them all sticky. I didn't get it all out, but I pulled a lot of it.

And because I spent time weeding out the spurge, I never made it to the vegetable garden to weed out the purslane. It's not flowering at the moment, so I'm not worried that I haven't weeded it out yet.

What is flowering is this Sedum, 'Frosty Morn'. 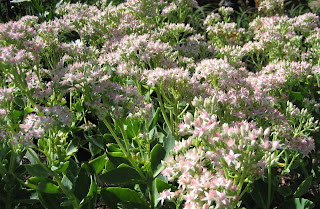 Generally, this sedum has variegated foliage, but most of mine have lost their varigation. That happens sometimes. I should have been more diligent in cutting out the non-variegated shoots, but I wasn't. The flowers are the same, though, very pink with lots of honey bees buzzing about.

I also wasn't up to date on the renaming of this Sedum to Hylotelephium telephium 'Frosty Morn'. Hylotelephium? If I were giving a tour of my garden and said, "how do you like my Hylotelephium", you all would think I was all snooty or something because everyone knows this is Sedum.

What would you think if I called it by one of its common names, Witch's Moneybags? I've been looking at the plant trying to figure out where that common name came from and I can't figure it out. I think I'm just going to keep calling it Sedum 'Frosty Morn'.

And now I'm making my prediction of when we will have our first frosty morning around here.

My prediction is October 25th.

What do you predict for your garden?
perennials weather weeds