The Last Squash of Summer

September 03, 2007
The harvest trug is full of peppers and tomatoes and the last two squash of summer, a spaghetti squash and a 'Cue Ball' squash. 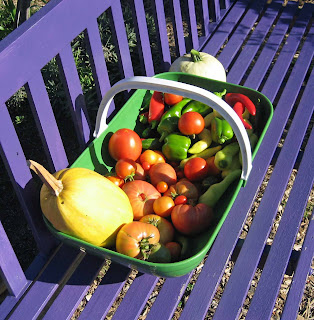 I love the 'Cue Ball' squash but am happy to have picked the last one this weekend. They weren't kidding when they said this is a prolific squash plant. This was the first squash I picked way back on July 1, back before we realized it really wasn't going to rain most of the summer. It is a fitting end that it also be the last one I picked for this year.

I'm going to plant it again next year! Now that I know how much one plant will produce, I'll just plant a little less of it, and I'll still have plenty. I'm almost starting to miss these little round summer squash already, except I still have six or so sitting on the table waiting for me to do something with them or give them away.

I know this is the last squash I'm picking this year because I pulled up all the squash plants this weekend. And when I did that, scads of squash bugs went scurrying around as fast as they could, wondering what happened to their little world. 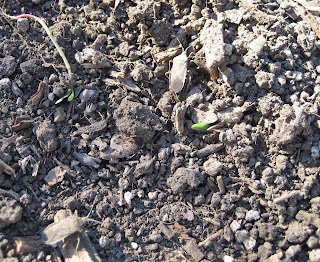 You might try clicking on the picture to see it "full screen" and then you'll see all the squash bugs. There were all sizes of them but for some reason only two made it into this picture. They must be camera shy and scattered when they saw the lens.

I don't usually do anything to control them, other than harvest the squash as fast as I can and rotate crops between the raised beds. They did seem particularly bad this year for whatever reason so I hope this isn't an indication of what they will be like next year.

I can't believe I'm already thinking about next year's vegetable garden, that this year's garden is nearly finished. This is early for me to start cleaning up the vegetable garden, but the squash bugs along with the drought contributed to what I consider to be the early demise of all the cucurbit crops and it was time to clean them up, along with the green beans.

Here's a view of the garden after I finished my initial clean up. 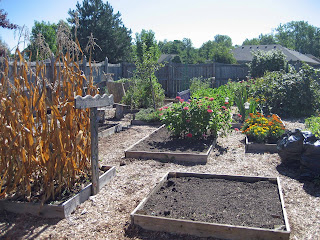 I left the corn standing because I like to hear the rustling of the stalks in the wind. I also left the tomatoes and peppers because they are still producing. And I left the flowers because they may be the only flowers I have for Garden Bloggers' Bloom Day on the 15th.

Just a day or so after I completed the clean up and had raked the empty beds smooth, I noticed all kinds of bunny footprints in them. What could those bunnies possibly still be eating out there? And could they please stay out of the cleaned up raised beds, I had them all nice and neat and leveled off.
vegetable garden