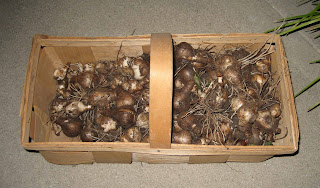 My quest to reclaim the ivy and forsythia beds continued this evening as I dug up daffodil bulbs that had struggled under the ivy. These bulbs are decidedly undersized, and I don't know what the varieties are, but they are still worth planting somewhere to see what comes up. I'll name them once I see the flowers.

The ground is so dry that these were easy to dig and came out pretty clean. I've spread them out on newspapers in the garage and will replant them in late October.

Excuse me, I need to go move the sprinklers.

I've started to do some serious watering with sprinklers to give the trees, shrubs, and perennials a fighting chance to make it through fall and winter. September and October are usually fairly dry months around here, so I don't hold out much hope that we'll get all caught up with rainfall before the first frost.

The lawn is also getting water in the process, but it needs it, too. I did the math, and it would be better to pay a higher water bill now than to have to pay to re-do the lawn later. Yes, it's been that dry.

I'm one of those gardeners who likes some lawn as a backdrop for the flowers and shrubs and trees. And I like to mow the lawn, too. With the dry weather, I figure I've mowed the lawn about half as many times as during a normal year, going as long as two weeks between mowings. When the rainfall is "normal", I sometimes mow twice a week.

Wait right there, I need to go move the sprinklers again.

I just saw the first woolly worm of the year, so now I can predict what kind of winter we are going to have. I'm going out on a limb after closely studying the color and size of the little woolly worm. Ready?

I predict that we will have some cold days, some snowy days, a bit of ice here and there, and generally be sick of winter weather by the day after Christmas. Then we'll whine about it until March. Bookmark this post and come back in March to see if I'm right.

Hold on a sec, I have to go move the sprinklers again.

The landscaper who was stopping by this evening to give me a quote for renovating the ivy and forsythia beds and digging a new bed by my fence had a family emergency and wasn't able to make it.

Does that mean I should proceed on my own? I looked at the ivy bed again this evening and I just might try to do that one on my own. I need to add about six to eight inches of good top soil to that bed anyway to bring it up to the level it should be, so I'm thinking that if I grub out some more of those ivy roots, turn the soil over in the process, reset the retaining wall and then bring in one (or two) truckloads of top soil, I'll be all set!

I'm going to think about that for awhile. In the meantime, if anyone has suggestions for shrubs and other plants to put in that bed for a nice foundation planting, it's on the east side of the house and the neighbor's house is far enough away that it doesn't shade it, so it gets good morning sun. There is no microclimate over there, so the shrubs have to be hardy to Zone 5. On the one end of the bed by the corner of the house, there is a Star Magnolia (Magnolia stellata) that is staying. I'm guessing the bed is about twenty feet long by five feet wide, but don't hold me to that.

I did like the Deutzia and Hypericum shrubs that were there originally, and I might try them again. They'd do a lot better without all that ivy, which I am not considering replanting. Ever.

I'll be right back, I need to go move the sprinklers again.

Our gardening friend from the Netherlands, Yolanda Elizabet, is at again, and has found my posts on tiny tomatoes and posted about her own tomatoes. Go check it out when you have a chance. 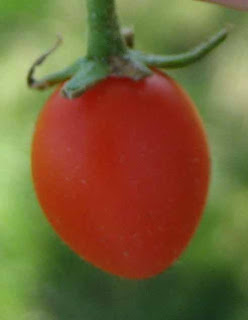 I'm still harvesting cherry tomatoes every day, and "regular" tomatoes every other day or so. I hope to keep harvesting until the first frost. First frost? I can't even think about that right now. The temperatures have been in the 90's so far this week. But it's going to be cooler tomorrow with a chance for scattered (or was it isolated?) storms. That figures, since Indianapolis will be on national television tomorrow evening for the NFL kickoff of the regular season. There will be a big concert downtown and other festivities to honor the Super Bowl champions, the Indianapolis Colts.

I'm sure the Chicago area garden bloggers will be watching intently, only dreaming of what it must feel like to have the Super Bowl champions in their city.

Good night, I need to go turn off the sprinklers!