September 11, 2007
More pictures from the picture box, opened up on Sunday to find one picture. It's like a time travel box, taking me back in time to other gardens I have tended.

Yesterday, I posted about my first garden beside the patio of a first floor apartment. As soon as I could afford it, I fled that apartment for a nice little house, where I could really garden.

Look at these daylilies I planted there 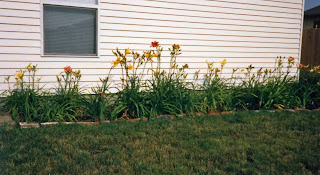 This is proof that I started out as a "too small gardener" with that narrow border along the back of the house, just big enough for a row of daylilies.

When I planted the daylilies, I didn't realize that I was tempting fate, that some gardeners have planted one daylily and ended up with hundreds of varieties, like Gotta Garden. Daylilies, like several other plants, can take hold of a gardener, in a good way, and never let go.

These particular daylilies were all unnamed varieties purchased from a friend's mother, who did end up focusing on daylilies and irises, and was breeding a few of her own. I bought about ten daylilies and rowed them up, as you can see. I didn't purchase any irises, by the way. I'm not sure why not, but she may have wanted more money than I was willing to pay at the time.

Then a few years later when I moved to my second house, I made arrangements to move these daylilies and a few other perennials to my mom's neighbor's garden for a few months, until I could plant them again at my new house.

Here they are at my second house. 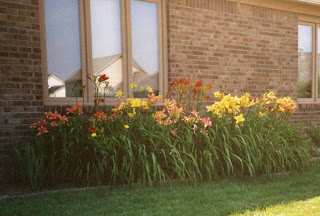 You can't really tell, but I made a much wider bed for the daylilies and it curved out into the yard instead of being straight across.

Later when I moved from this house to where I am now, I left these daylilies behind, along with most of the other perennials. I moved on a cold January day, when it was -19 F, with six inches of snow and ice on the ground, not a good time to be digging anything outside.

The only plants I took from that second house were some of the hostas that my sister-in-law gave me. I planted them in a friend's garden earlier that fall, and then tranplanted them again when I moved to my current house and garden.

I don't regret leaving the daylilies behind. They weren't all that spectacular and they all seemed to bloom at the same time. And I know that if I want to, I can go back to my mom's neighbor and get some of them, because some of them are still there at the end of their garden, left behind from the move from my first house. Here's a picture of one of those daylilies blooming earlier this summer. 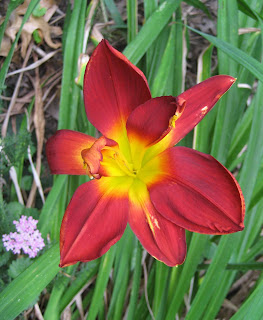 It's nice to know those daylilies are there, if I want to get them. But, no hurry. Wait, there might be a hurry... those neighbors are moving in a few weeks. Will the new neighbors let me dig up "my" daylilies? Is there a point in time when I can no longer consider them mine to get? Maybe I ought to go over there this weekend and get them before it is too late?! And is that a yarrow plant next to it from my first house and garden? I probably got that from aunt. I want to get that, too.

Suddenly I'm all nostalgic for my first daylilies and that yarrow, too! Yes, I've got to go dig them up this weekend before it is too late.
gardening perennials