My Taste in Garden Mysteries 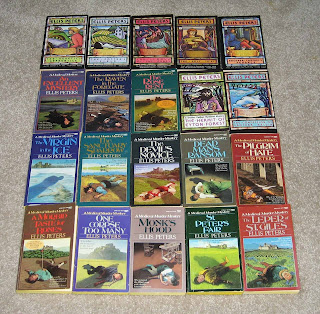 What do you look for in a good garden mystery? Does the crime have to take place in a garden? Does the protagonist have to be a gardener? Do you want to learn about plants as the mystery is solved?

For my taste, I like for the crimes to be solved by a gardener and to learn about a few plants along the way when I read a garden mystery. That’s why I like the Brother Cadfael mysteries written by Ellis Peters.

There are twenty Brother Cadfael mysteries in the series, and several years ago, I read them all. I enjoyed the setting of twelfth century England and how Brother Cadfael would be peacefully tending his monastery’s herb gardens, and then get pulled away to solve a murder mystery.

Every time I read these mysteries, I’m reminded of the importance of the herbalist in medieval times. They grew the herbs and provided the potions, tinctures and other herbal brews to treat a variety of ailments. They were sought after as wise and all-knowing, and in the case of Brother Cadfael, as someone who could put together all the clues and help the local sheriff solve the latest murder mystery.

I do recall at times stumbling a bit on how some of the Welsh names were pronounced, and getting a bit lost and tired in some of Brother Cadfael’s recollections of his life as a crusader prior to joining the monastery or the recounting of battles between King Stephen and Empress Maud over the control of England. But those weren’t enough of a distraction to prevent me from finishing each book and eagerly starting the next one.

I’ve kept all the books in this series, and since it has been several years since I’ve read them, I’ve decided I should read them again. This time, I’ll have at my side a companion book, Brother Cadfael’s Herb Garden by Robin Whiteman and Rob Talbot. They’ve listed all the plants mentioned in the mysteries, including where they are referenced and how they were used in medieval times. I’d better hang on to this book as it appears that it is no longer available and used copies have increased in value!

You may also be familiar with Brother Cadfael from the PBS mystery series of the same name. If you enjoyed those episodes of Mystery! perhaps you might like the books, too.

What’s your favorite garden mystery? Post about it or post about the official Garden Bloggers Book Club August-September selection, A Hoe Lot of Trouble by Heather Webber, then let me know and I’ll include you in the Garden Bloggers’ Book Club virtual meeting post on September 30th.

(And please take a minute to complete the book club survey to let me know your choice for the next book club selection. I’ll announce it later this week.)

Mr. McGregor's Daughter said…
I don't read "garden mysteries," but I LOVE Cadfael. I'm actually into midieval mysteries, which is how I found this series. (If you really want to stumble over names, try the Sister Fidelma ancient Ireland mysteries by Peter Tremayne.) This Winter I intend to try some of the garden mysteries that bloggers suggest. Brava to you for the book club!
Sun Sep 23, 03:15:00 PM 2007

Annie in Austin said…
Wonderful choice, Carol! I read most of this series through the library, but own a few of them.

Recently I came across the Brother Cadfael's Book of Days, a compilation book with a quote for each day of the year. These words from chapter 2 of The Leper of St Giles appeared on September 21st:

Autumn was a good time, since there was digging to be done, to make the cleared ground ready for the operation of the frosts to come.

My book club mystery post will be ready once I quit playing around with Passionflowers.

Natalie said…
I read a lot of books (although not necessarily a lot of mysteries) and I must admit to never having come across a garden mystery - a new genre to explore! How fun!
Sun Sep 23, 06:12:00 PM 2007

Anonymous said…
I tried reading one of these books years ago and found it rather dry. Maybe now that I enjoy gardening I will find it more interesting. I love mysteries, but I find I read a bunch and get burned out and then come back to them several months (and different genres later).
Sun Sep 23, 07:10:00 PM 2007

Anonymous said…
Speaking of PBS Television, I recomend "Rosemary & Thyme" it's a British TV series about two women (R&T)who garden and landscape for some of the most beautiful gardens you'll ever see. In the meantime sloving mysteries and murder. I am not lucky enough to get it on TV, so I went on-line and bought each set of episodes on DVD.
Don't miss this!
Mon Sep 24, 08:03:00 AM 2007

Yolanda Elizabet Heuzen said…
I've read most of the brother Cadfael mysteries and I've seen the television series too of course. Great fun! Recently I bought the complete dvd series of Rosemary and Thyme, two female gardeners who always stumble across the odd murder or two while gardening. Very British and very amusing.
Mon Sep 24, 02:11:00 PM 2007

growingagardenindavis said…
I love mysteries, medieval settings, and gardens so I will reserve these at my library as soon as I'm done here...I love a good series you can get lost in! And the Rosemary and Thyme DVDs are available through Netflix for those who have that option.
Mon Sep 24, 09:45:00 PM 2007

Carol Michel said…
Mr. McGregor's Daughter... I hope you join us sometime in the book club. I'll have to look into those Sister Fidelma mysteries. They sound intriguing.

Annie in Austin... You made me buy a new book. Used, but I bought Brother Cadfael's Book of Days. The Internet makes it too easy! I'm looking forward to your review.

Natalie... Come by the blog on the 30th for the virtual meeting post which will have links to all the reviews of garden mysteries that bloggers submit.

Heather... Do give them another try. You indeed might find them more interesting now that you are gardening.

Anonymous... Yes, I've watched episodes of Rosemary & Thyme on PBS and did enjoy them.

Yolanda Elizabet... I do like the British humor. Isn't it a bit odd that someone gets murdered wherever those two ladies show up to renovate a garden? Makes you wonder sometimes...

Leslie... Ditto, let us know how you like Brother Cadfael's mysteries. And that's a good tip to get the DVD's through NetFlix.

kjohnson said…
Hi Carol, I have written about A Hoe Lot of Trouble on my blog www.gardenhistorian.blogspot.com
Please add me to the list of reviewers.

Anonymous said…
Your review is interesting and has certainly made me want to read this series of books as I love mystery books.
The book cliub is an excellent idea and I have thoroughly enjoyed reading everyone's reviews. sara from farmingfriends
Mon Oct 01, 01:52:00 AM 2007

Entangled said…
Yes, yes, yes - I'm so happy to find another Brother Cadfael fan. I only wish I had saved those paperbacks, but I took them all to the used bookstore one day in a fit of decluttering. I do have Brother Cadfael's Herb Garden, which is a beautiful book even for those not particularly interested in herbs. And I didn't know about Brother Cadfael's Book of Days, but I'm adding that one to my list.

I didn't merely stumble over the Welsh names - I tripped and fell. I gave up trying to pronounce them to myself, and just hoped to recognize them the second time I came across them. ;-)
Tue Oct 02, 11:24:00 AM 2007