What Makes Cats Happy and a Guest Photographer

September 22, 2007
As part of the renovation of my foundation plantings on the east side of my house, I decided to dig out all the catmint (Nepeta sp.) growing there. I called my youngest sister and said "I'm digging out all my catmint, do you...". Her immmediate response was yes. I didn't even have to finish the question. She takes nearly any every plant I offer her.

So yesterday I cut the catmint way back, dug it all out, and threw it in a trash bag. This morning, I took it to my sister's house and left it by the front steps and went inside.

When my sister arrived a few minutes later, this is what she found. 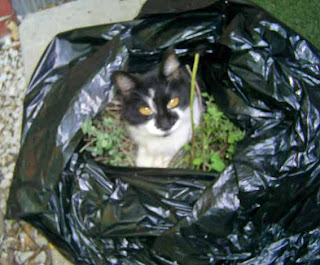 Their porch cat, MooMoo, had plunked herself down in the center of the catmint and laid there in a state of feline bliss.

I guess cat's do love catmint. Maybe this is why the neighbors' cats always seemed to be hanging out at my house? If so, they are going to be mighty disappointed that the party is over.

MooMoo, by the way, is a "special needs" cat. She was rescued years ago from some drug addicts by my sister's step-daughter. They said they gave MooMoo's mother LSD when she was pregnant and MooMoo was the only surviving kitten from her litter. Every once in a while, my sister thinks that MooMoo has some flashbacks or trips out from her previous LSD exposure, but is otherwise a good cat. She stays on the porch year around and just generally hangs out.

It is pretty shady by MooMoo's porch, but we did find one fairly sunny spot nearby to plant her a bit of catmint. The rest we put in the backyard for the other cats.

I just hope the cats give the catmint a chance to get established before they lay all over it.