When Yellow Jackets Are Threatened

September 19, 2007
Update: Picture added below so you can see that the nest is hidden.

Yesterday I had my house inspected for termites or any other critters that might be trying to destroy it. Luckily, I had none of those. However, the pest control technician did notice that there were a lot of yellow jackets, specifically German yellow jackets, flying around the porch by the front door.

He said there had to be a nest nearby. After a few minutes of searching, he found the entrance. It was right in the corner of the porch above the front door. You could see they were flying in and out of a little hole between the wood trim and the brick. Once I saw it, I don't know how I missed it because you could even see some residue on the brick where they had been coming and going.

He recommended spraying an insecticide dust up into the hole at night and sold me some to use.

Night came and I prepared for battle. I read the instructions and it seemed like it was going to be pretty easy.

The instructions noted that you should not shine a flashlight or other light source directly on the nest as this would alert the yellow jackets to your presence. To see what I was doing, I turned on the porch lights, which are recessed in the porch ceiling. I figured they would not be a direct light on the nest but would provide enough light for me to see what I was doing.

I was not prepared for what I saw.

There were hundreds of yellow jackets swarming by the entrance to the nest. At that point, I maybe should have stopped to consider if I should be the one applying the dust. Instead I reached up there and gave the dust bottle a couple of good squeezes sending dust up into the hole and all around.

Then I ran as fast as I could down the steps, along the walk and into the garage. Once there, I could hear something buzzing around my head so I threw down the duster and wildly waved my arms all around to try to get rid of it.

"It" was a very mad yellow jacket. And then it stung me on the neck. Ouch! I ran into the house and then realized it was still on me, and it stung me again on my upper chest. Then it flew up by the light in my bedroom where it continued to angrily buzz around.

I fled to the living room, and called my friend and neighbor next door to tell her what had happened.

Then I went back to my bedroom where I could hear that yellow jacket buzzing around the light. I ran into the bathroom to get hydrogen peroxide to clean the two sting sites which were now big welts.

Then I applied a baking soda paste to the welts and called my friend back. I looked up on the Internet to see what else I should do. Apply ice for swelling. So I did that. My friend found a website that said to go to the hospital if you were stung more than 9 times. I was stung twice, so I stayed home, and I had no symptoms other than some swelling of the sting sites.

In the meantime, that yellow jacket was still back in my bedroom. I could not go to bed with it in the house!

So I turned off all the lights in the house except one in the laundry room hallway, hoping the yellow jacket would go to that light, at which point I could use a fly swatter to kill it.

There I sat in the dark in the living room, with my friend on the phone in case I should go into some kind of shock or something, with an ice pack on my neck, waiting for the yellow jacket to go toward the light of the laundry room hallway.

While I waited, I looked up more information on the web about yellow jackets. Turns out they are aggressive when threatened and can sting multiple times.

Then I heard it buzzing again nearby me, in the dark, in the living room. It was coming after me, not going toward the light!

I flew up out of my seat and looked around in the dark. I looked on the computer screen, the only source of light in the room, and it wasn't there.

Maybe I was hearing things.

I sat back down, talked on the phone some more, worked online some more. Then I heard the buzzing again. I jumped up, and this time I saw the yellow jacket. It was hovering near death. I swatted it down and then proceed to swat it to its death.

Then I went to bed.

This morning when I got up, I had hoped to see hundreds of dead yellow jackets on the porch. There were a few, and then later a few more. But activity around the opening has slowed way down, and those yellow jackets that I do see are either crawling on the wall or flying slowly. I'm supposed to dust the nest again in a few days and then when I see no more yellow jackets leaving or entering, I can caulk up that hole.

Once again I think it is safe for visitors to come to the front door, and for me to use it, too. Order is being restored.

And I'll be just fine, too.

What did I learn from this?

2. Do your research BEFORE you set out to destroy something like a yellow jacket's nest.

3. Gardeners are bound to be stung. Know how to treat a bee or wasp or yellow jacket sting before you are ever stung.

4. Be more observant when you see an unusual number of wasps or yellow jackets because they may be nesting nearby. I had noticed a lot of yellow jackets but just assumed it was a normal amount for early fall.

5. Maybe consider having the pest control technician come back for the kill. Though he didn't offer to do that. Wonder why?

No picture tonight, unless you want to see a picture of a dead yellow jacket. I do have one.

Pictured added so you can see that the nest is hidden behind the wood. All that white stuff on the brick is the insecticide dust residue. 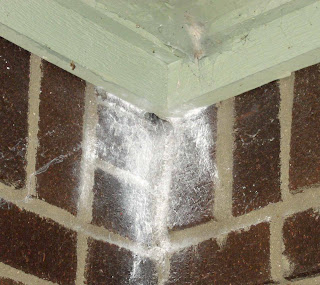