Checking on Stuff in the Garden 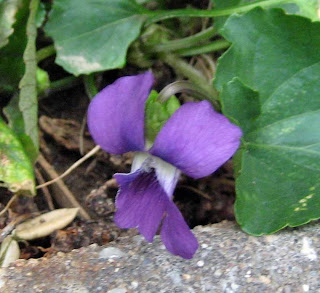 As you walk around the garden, are you checking those last blooms trying to figure out if you'll have anything still blooming on the 15th of November for the next Garden Bloggers' Bloom Day?

I am. Today I found this last little violet blooming along with some Stella D'Oro daylilies, a bunch of shasta daisies, one tall phlox, and a spiderwort or two. There's even a confused hosta trying to bloom again.

Who knows what the next few days will mean in the garden? There is the strong possibility of frost in my area and throughout the midwest early Monday morning. After that it looks like it could be a week or longer before there's another chance of frost.

I for one gardener am ready to get on with it. Let it frost. Without the frost, I'm whistling along thinking I have all kinds of time to do the fall clean up, and I know I don't really. So if it frosts, I'll get going on the clean up. Let it frost.

Do you cover plants when it frosts this late in the fall? I don't. When it's over, it's over, whether that be in early October or early November. But this year, oddly enough, I'm actually thinking about covering that little hosta that's trying to bloom again. That hosta may be my only hope of having something blooming outside in November, at least something besides pansies. Otherwise, I may just have "frozen blooms" for Bloom Day on the 15th.

"Frozen blooms" are those flowers that are still technically there, on the plant, but are frozen in time, caught off guard by a frost after an unusual warm spell. They are flowers that don't really have a chance to fade and set seed, since they got zapped by a frost, or worse, were encased with ice or snow.

But if frozon blooms are all that you have for the next Bloom Day on November 15th, count them and post about them!

Oh, and by the way, I did check my new trees this morning. They're fine. They didn't fall over in the middle of the night or suddenly drop all their leaves or anything like that.

Here's a picture of the Carolina Silverbell that I didn't post yesterday. 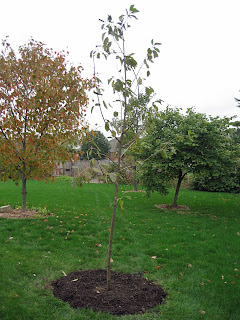 You can see behind it there's a red maple (Acer rubrum) changing colors, finally. A good frost ought to help it get going. That other smaller tree, with leaves as green as the grass, is a Redbud (Cercis canadensis). It should have yellow foliage any day now. 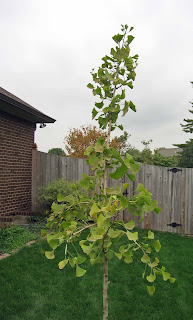 I'm hoping it will also have some pretty yellow leaves in a few days.

That's what I'm checking at May Dreams Gardens, what are you checking in your garden?

(Tomorrow... hand made gifts for gardeners, that anyone can make, maybe.)

One other thing... I got an email that the book 'Backyard Giants', that several garden bloggers read and reviewed this fall, will be included in a story about giant pumpkins that will appear tomorrow, October 28, on "CBS Sunday Morning with Charles Osgood." I can't believe the size of some of those pumpkins!)
flowers garden bloggers bloom day trees