Closure at May Dreams Gardens 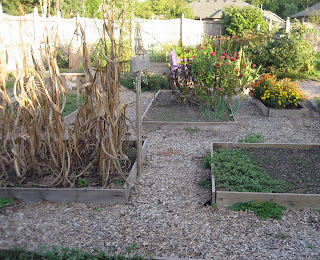 I thought it might help those of you who deal with issues of "closure" if I provided some updates on recent events here at May Dreams Gardens.


Moles. As it turns out, I am as poor a trapper of moles as I am of rabbits. Once I set that mole trap last Saturday, the moles seemed to disappear. I've not seen a new mole tunnel show up anywhere. I checked with the neighbors on both sides and neither one has noticed any new evidence of moles in the past week. "Come out, come out, wherever you are, Mr. Mole, I spent $40 on that trap, just for you." If I don't trap the mole, I have to assume he's still out there, somewhere, and will be digging again soon. So, the trap remains set, waiting, and there is no closure, yet.

Time Capsule. I most definitely want to put together a gardener's time capsule and bury it or hide it someplace so someone either digs it up or finds it in about 75 years. However, there is a lot of seasonal work to do in the garden right now, so I'm making it a winter project to decide what to include, what container to put it in, and where to put it. Then I'll finish it up in the spring, because spring in the garden isn't so busy, right?

Vegetable Garden. It's been over a month since I posted anything about the vegetable garden, and nearly that long since I spent any quality time in it. I miss it, it misses me! I'm not much of a fall crop gardener, though I want to be. The vegetable garden is pretty much finished, except for some small-ish tomatoes and oodles of peppers. I pick enough tomatoes to eat, but since I'm not all that fond of peppers, I haven't been as faithful about picking them. I'm planning to do some more clean up in the garden this weekend, and will pick as much as I can because I heard the words "patchy frost" in the weather forecast, but I didn't catch when.

Terrarium. Many of you may not remember when I wrote about my terrarium, that has been sitting empty since I bought it. Sorry, I can offer no closure on this, either. I still haven't planted anything in it. But it did occur to me that if I am going to mail order some plants to put in it, I'd better do that soon before it is no longer safe to ship them to me.

Are there any other post topics that I need to bring some closure to? If you're curious about something I wrote about before, how it came out or whatever, leave me a comment or send me an email.

Now that it is actually like fall (much cooler temperatures), this weekend is the time to also start bringing closure to the gardens. My garden clean up begins in earnest first thing Saturday morning. Here's my list of what I need to do.

1. Straighten up the garage enough so I can start to bring in garden ornaments, pots and summer flowering bulbs that would not make it outdoors in an Indiana winter.
2. Harvest some compost from the compost bins, prep them to be filled again.
3. Weed and clean up the vegetable garden, pick tomatoes and peppers.
4. Water trees (which I can do with a sprinkler, so it won't take much time.
5. Go buy a new tree. Plant the tree.
6. Check for moles.
7. Take pictures for Garden Bloggers' Bloom Day.
8. Read a chapter or more in the current selection for the Garden Bloggers' Book Club, Green Thoughts: A Writer in the Garden by Eleanor Perényi.
9. Start to put some stuff away in the garage.
10. Empty the worst of the container plantings that are more eye sores than anything else.
11. Inventory all bulbs purchased for fall planting and determine where to plant them. I won't plant them for awhile yet, and no, it is not helpful for anyone to point out that planning should have been done before buying.
12. Dig out the forsythia that came back after I cut it down to the ground.

Then it ought to be time for lunch on Saturday.

Ha ha, kidding about getting all that done by lunch on Saturday. It will take me at least until evening. Ha ha, kidding again. I don't know how much I'll get done, but at least I have a 'to do' list. (And having provided you with a peak at the 'to do' list, did I just add another post to the list of those that might require some closure later? It's a vicious cycle, isn't it?)

What are you doing in your garden this weekend?
gardening pests shrubs vegetable garden