Do You Test Your Soil? 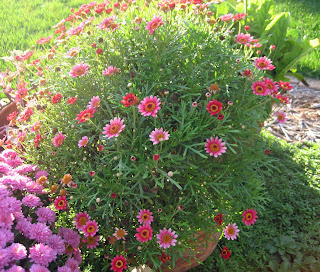 When plants in my garden don't do as well as expected, I like to figure out why. This year, I planted two containers with Argyranthemum frutescens.

I bought the plants from the same garden center where they were probably growing side by side. I planted them with the same basic soil mix and though one was in the front garden and one was on the back patio, they were both out in the open so they got equal amounts of sun. 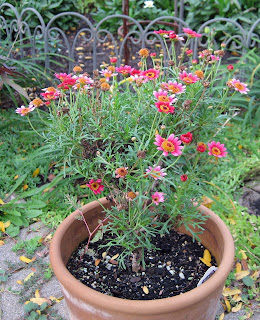 A few years ago I bought what I thought was a Red Oak (Quercus rubra) that never lived up to its potential. It always looked a bit sickly and showed signs of iron chlorosis, which is quite common in Pin Oaks (Quercus palustris) grown in alkaline soil. In fact, the whole reason I chose the Red Oak over the Pin Oak was because I figured my soil was probably alkaline. Most of the soil around here is.

After a few years of looking at the yellow leaves of that oak, I decided that once again I had purchased a mis-identified tree and this one was probably a Pin Oak.

In fact the more I looked at this tree, the more I was convinced that it was a Pin Oak. Why didn't I realize that in the garden center? At one time in college, I was able to identify 10 or 12 different oaks commonly planted in the home landscape. But believe it or not, we were taught to identify them by their buds, and this one was all leafed out when I bought it. I was aware of the general leaf shape of Pin Oaks and Red Oaks, but they are somewhat similar. That's my story, and I'm sticking to it. (And in case you are wondering, no, after all these years I could not identify a red oak from a pin oak by its buds. If you don't use that kind of knowledge, believe me, you don't remember it.)

Anyway, for a season or two, I tried to fix the soil for the Pin-Red Oak by adding sulphur to the soil around it but the results were mixed. I finally cut the tree down and put it out of its misery.

I've been thinking about that oak tree and wondered if the soil pH was really the problem or was it just a sickly tree?

I've never tested the soil in my garden, even though all the how-to gardening books seem to suggest that is the first step to a successful garden. I've always assumed my soil was alkaline and planted accordingly.

Soil pH, what does it matter?

It matters a lot to the plants.

So I found an old soil test kit I had bought years ago but never used, and tested my soil this evening. 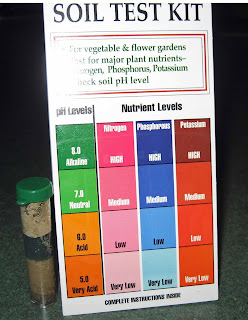 It's a bit hard to tell from this picture, but guess what? Just as I suspected, and really knew all along, the soil pH around here is high.

Will the confirmed knowledge that my soil is quite alkaline influence what plants I buy? Yes, it will and it already does. I would never have deliberately planted a Pin Oak, and I've avoided planting Rhododendrons and other shrubs that are known to prefer acidic soil, even though they are sold in the garden centers around here, where nearly all the soil is alkaline.

And it means that I'm going to give up on the idea of planting Halesia carolina, Carolina Silverbell. When I was doing my final checking to see if this was for sure the tree I wanted to get, I discovered the one thing I'd forgotten about it, it likes acidic soil.

Given my experience with the Pin-Red Oak, and the price of the tree, I don't think it is a smart choice for my garden.

Instead I'll go to the nursery as planned and just see what trees they have. But I'm taking one of my tree books with me, so I can do on the spot research before I buy a tree I'm not all that familiar with, even if that makes me look like a gardening geek.